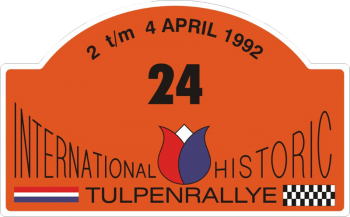 For the organization it makes little sense to organize a next modern rally with special stages in the Netherlands., after the financial problems of the past years, the difficult discussions with the government and the resulting lack of competitive special stages. After a long deliberation, it is decided to organize a rally for classic cars and to join the European Championship for such cars that the F.I.A. is actually setting up. The rally is held entirely in the Netherlands, also has special stages and the event is divided into two classes. The competition class (31 participants) runs the test at speed and strives for the fastest time, while the regularity class (19 participants) runs the tests on the basis of regularity. The aim is to approach the predetermined average speed as closely as possible at any time during the test. This is measured not only at the finish, but also on the road with a few secret time controls. The competition class is open to cars built prior to 1966, while the regularity class is driven by cars built between 1931 and 1971.

The number of participants is slightly disappointing with 50, but this is probably due to the fact that despite the previous commitments, the event does not count towards the F.I.A. European Championship and the Mitropa Cup. The main registrations are Peter van Merksteijn and Hans van Beek, known from the modern rally sport, with a Porsche 911, Paul Maaskant with Circuit Zandvoort director Ben Huisman in a large Ford Shelby, Dick Waaijenberg and Ton Roks, in an Alfa Romeo, Eddy van den Hoorn and René Smeets with a Volvo 122S and the brothers van Thiel with a super-fast Mini Cooper. Other starters are the Ford Mustangs from Eiso Bergsma and Jaap van der Ende and some very nice Ferrari’s (among others from Bart Rosman). From abroad, the brothers Hadamczik appear in a fast Mini Cooper, Graf von Wedel with an Austin Healey and Graf zu Ortenburg with a Triumph TR4.

Twelve special stages are being included in the route (100 km), including the Vlasakkers. After the start, the participants leave for the Flevohof for the first test. The rest of the Friday include the tests in Barneveld and on the Vlasakkers in Amersfoort. Lunch on this day is at Castle the Cannenburgh in Vaassen. On Friday evening the participants return to Barneveld for dinner and the night’s rest. The distances between the tests are considerably longer than in the last modern rallies and they carry on beautiful tourist routes. The second day initially has routes in Barneveld, followed by a number of tests on the dikes near the Waal. Lunch will then take place at the Estate Doddendael in Ewijk.

The German Graf von Wedel makes a considerable crash in the Vaassen area with his Austin Healey and can then write it off. Peter van Merksteijn is supreme and knows to win almost all the tests. Paul Maaskant wins three tests, with the particularly heavy and 380 hp Ford. Peter van Merksteijn and Hans van Beek win the competition class (Porsche 911), ahead of Maaskant-Huisman. The brothers Van Thiel and the duo Waaijenberg-Roks are almost the whole rally in a fight wrapped up for the third place. The brothers Van Thiel eventually win this fight. Renger Guliker and son-in-law Gerard Simon write the regularity class on their name (Jaguar XK120), followed by the experienced Henk van Montfort with an Audi. For the first time the prize-giving ceremony can be held on Saturday in the Veluwehal in Barneveld. In the past this was not possible because of the Sunday rest in the municipality of Barneveld.

Take a look at the Tulpenrallye edition 1992 with the selection of images below that we have selected for you!