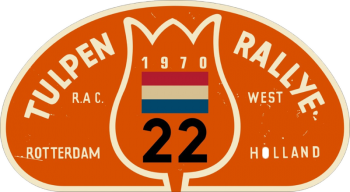 The secretariat of Sybren Roest has moved to Schiedam, above a shop in household items. The start and finish are again in Rotterdam, but the route of the rally goes much further south: to the ski resort of Villard-de-Lans. In Rotterdam the business community rallies behind the rally and various other festivities are being organized around the event. The financial survival of the rally is secured for the time being, when General Motors and Esso guarantee 200,000 guilders. With this, the 1970 edition can be organized and the necessary foundation is laid for the next edition.

The number of participants is limited, partly because of the World Cup Rallye London-Mexico which is held this year. There is a Lancia from the factory for Barbasio, as well as four Trabants and three Wartburgs. The French professional Marie Claude Beaumont is also at the start, as is Achim Warmbold with Opel Kadett, and the Belgian Jaquemin with Renault Alpine. DAF registers cars (type 555 with Renault Gordini engine) for Bert Dolk and Jean-Louis Haxhe. Striking registrations are Tom Gatsonides (the son of initiator Maus Gatsonides) and Dirk Buwalda with a DAF 55, Rob Slotemaker and Ferry van der Geest, who are racing the circuit Alfa Romeo 2000 GTV of Slotemaker for the Racing Team Transavia Holland completely painted in orange, Ben Pon with Autovisie-journalist Rob Wiedenhoff in a Volkswagen Beetle 1500, the brothers Dick and Wil de Wild with Vauxhall and Kees van Grieken-Marcel Verbunt with a BMW 2002. The Dane Preben Andersen comes to the start with a DAF 55; it is his 21st participation in the Tulpenrallye!

The trials in the military area’s around Amersfoort and the final test at the Circuit van Zandvoort are not included in the route this time. The rally has nine special stages with a total length of 76.9 km. This involves driving over closed roads, where a prescribed maximum time has to be driven. On the three special tests (19.3 km) it is only about the fastest time. From Rotterdam the route goes via Francorchamps and Larochette to Saverne. Via Uffholz and Morez the participants arrive on Tuesday morning in Villard-de-Lans. From Villard the Night of Villard-de-Lans is then driven over 660 km. Because of the snow a diversion route was made for this night, which were handed over to the participants just before the start in Rotterdam. A final check of this route however, shows that there is still too much snow on it; a new diversion route is then constructed and given to the participants during a control on the route.

After a breakfast and rest, the teams leave on Wednesday morning from Villard in the direction of Morez, where a 290 km loop is driven and then they have a night in the Alps. In the meantime it has started to thaw and that is why only six teams retire during this night. At the departure from the Alps all participants get a bunch of tulips from Rotterdam. From Morez the route goes via Giromagny, via a test at the Ballon d’Alsace and another test at La Petite Pierre (7 km through the forest of Bouxwiller), to Saverne where there is rest before dinner. The route back through Belgium, where in the past always a number of tests were organized, this time has not been scheduled and therefore the crews drive mainly via highways to the Circuit of Zolder, where the third and last special stage is held. The test on the Col de la Faucille is cancelled because no permission is given by the French authorities.

Rob Slotemaker has to give up at Spa with a broken head gasket. Barbasio and Jacquemin master the battle until Villard’s rest and they keep zero penalty points, followed by Ragnotti, Van Grieken and Van Lennep. In the Alps, these classifications are held to a significant degree, and these are expected to be consolidated on the way back via the Vosges. There is no question however that the return route proves to be particularly heavy. Jacquemin retires, after he gets penalty minutes at the start in Villard and already lives in bad luck with the organization; after a discussion about a missed check, he gives up. Barbasio drops further back in the rankings when he has to change a flat tire in the mud. Kees van Grieken is leading the way, partly because of his attacking style of driving. The two experimental DAFs 555 fall out in the first half of the rally with technical problems, after which the service teams under the leadership of competition manager Rob Koch dedicate themselves to the service of the eight private DAFs in the rally. Kees van Grieken and Marcel Verbunt win this edition, ahead of he Opel Kadett of Jean Ragnotti. They are the fourth Dutch team to win the Tulpenrallye, after Van Zuylen van Nijevelt, Tak and Kreisel. The Coupe des Dames is for Marie Claude Beaumont and M. Fouquet. The Nations Prize is won by the Dutch K.N.A.C., with Van Grieken, De Wild and Baars, while the club team prize is conquered by the R.A.C. West. The brand team prize is for BMW.

Take a look at the Tulpenrallye edition 1970 with the selection of images below that we have selected for you!