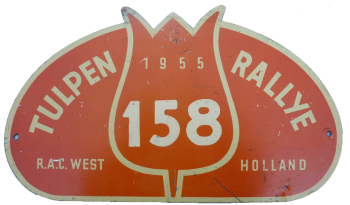 The handicap system is being further complicated this year. A number of regularity or secret time checks are scheduled, also at the request of the French police. When the average speed is higher than 75 km per hour, the crew receives penalty points and when the average is even above 85 km per hour then the team in question is excluded. The special stages have special names such as ‘Welcome to the Vosges’, ‘Morning in the Alps’ and ‘Turning in the Jura’. The favorites this year include the Dutchman Hans Tak with Mercedes 300 SL, the Brit Bill Banks (Bristol), the European champion 1954 Walter Schluter, the German crack Werner Engel, this time with a Mercedes 300 SL, and the Dane Stenfeldt Hansen with the same car. The Dutch crew den Ouden and Gorris come to the finish with a Citroën 2CV with only 12 hp.

Stuttgart is the central meetingpoint this year after the approach-routes of about 700 km each. The factories of Porsche, Robert Bosch and Mercedes, all based in Stuttgart, provide a welcoming reception for the participants. The city council receives the rally drivers with a glass of champagne and later in the day, after a free afternoon, with a dinner. The hall is decorated with 5000 tulips that have been supplied from the Netherlands. The next day, after an overnight stay in Stuttgart, the first special stage starts immediately outside Stuttgart. The route runs for a large part over the Schwarzwald Hochstrasse. After Freiburg, the first special stages will follow. The 12 km road to the Schauinsland summit is completely blocked for other traffic. Via Breisach, the crews comes back to France.

The second special stage is around Masevaux with the Route des Crêtes and the Route Joffre. After Valence, the second special stage test is scheduled, the 7 km climb to the Auberge du Pin, while the 3rd special stage is over the Col de la Faucille. Here the Dyna-Panhard of the Dutch team Couwelaar-Hora-Siccema gets on fire. The crew remains unharmed and knows just in time to get the luggage out of the car. As a result, the second part of the crews is a considerable delayed. On the return route, the Ballon d’Alsace is also put on again. This time a new trajectory was found for a classification test of 3.9 km downhill. Then it goes to Luxembourg where the Route of the Thousand Bends ends this time in Vianden. The participants set sail for the Nürburgring on the roads that were particularly bad due to the severe winter. The last special stage will be held there: over the entire circuit, including the south loop (27 km total), within a time frame of 22 to 30 minutes. Through the usual reception at Philips in Eindhoven, the teams then return to Noordwijk.

Pat Moss (her brother Stirling wins the Mille Miglia the day after the start of the Tulpenrallye in Italy) is already out of luck on the approach route. Hans Tak is the fastest in the first special stage, Schauinsland, including his handicap as well. Martens, with a 1100 cc Simca with a much lower handicap, follows him closely. This battle will continue throughout the rally. The experienced team Jetten-Van Noordwijk has problems when they find out on the approach-route at the border to Germany that the Jetten passport has expired. The friendly customs however let them pass through anyway. Then a KNAC official goes to the Dutch embassy on Monday and knows how to solve this case just in time. At Breisach at the border, Jetten gets his passport back and can thus continue the rally in France. Tak starts 20 seconds early on the climb to the Auberge du Pin. Because this is the result of a misunderstanding with the starter, it is later decided that he will not be penalized further and the correct start time is assumed. This decision and the way it is communicated will be spoken about for a long time.

117 teams arrive at the finish in Noordwijk without penalty points. A number of participants at the finish therefore also believe that this seventh Tulpenrallye has been rather light. The final test at Zandvoort thus once again plays an important role in determining the final classification. All participants are divided over 10 races, of 10 rounds each, during which participants with different handicaps start in the same race. This does not make it easy for the spectators to follow the competition. The Norwegian Greta Molander makes the fastest time, corrected for the handicap. She climbs from the 46th to the 9th place in the final classification. Jan Martens starts his race as leader in the standings and the victory in the rally can hardly escape him at that moment. He starts cautiously. He has noticed that his clutch is slipping a little, but comes first after the first lap and stays at that place until round seven. In the 8th round he suddenly comes in third and after that he does not pass the start finish. In the 8th round he suddenly passes by in third position and after that he does not pass the start-finish anymore. His clutch has now completely gone and he has to give up in sight of the finish and the final victory. He has spent months preparing for the rally and is very disappointed. Bill Banks drives very fast at Zandvoort and after his ride it is still questionable whether Tak can keep his leading position at that moment. He has to do lap times of 2.09 minutes. The first rounds are in 2.14, 2.09, 2.08 and 2.09, where the engine makes weird noises and produces a lot of smoke. Tak takes another good look and finally manages to set a fast time, making him the second Dutch overall winner of the Tulpenrallye.

Hans Tak expressly involves the team Martens – Eerligh in his honor; he knows he would not have won if the Fiat 1100 TV had not broken down. Tak also asks to award the class prize won by him to the second placed Austin Healey van Herweyer-Boekhout, because he realizes that his 300 SL is very fast and has many PKs for this class in which he was registered just before the start. The Nations Trophy goes again to the Germans (including Engel), while the B.A.R.C. from London (Banks and others) wins the prize for the best club team. Maus Gatsonides is the next best classified Dutchman (4th) and Greta Molander (9th overall) wins the Coupe des Dames. Saab wins the brand prize, followed by Simca. Piet Jetten and Louis van Noordwijk win two new prizes: for the best classified Dutch team in the last 5 rallies (Five Years Cup) and for three times in a row to be classified with zero penalty points (the Three Zero’s Coupe).

Take a look at the Tulpenrallye edition 1955 with the selection of images below that we have selected for you!