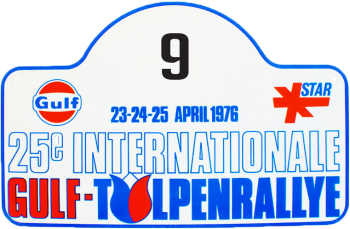 The organization has overcome the financial problems of the past, thanks to the international sponsorship of Gulf. The budget for this rally amounts to 135,000 guilders, with Gulf taking on a number of costs.

Under starting number 1, Maurizio Verini, European champion rallies 1973, starts with a Fiat 131 Abarth Mirafiori. The Finn Markku Alèn leaves with the same car, by which the Italian factory team is complete. The contenders from Belgium are the teams Gustaysson-De Langhe, Staepelaere-Vaillant (winners in 1969) and Didi-Lux. Lars Carlsson-Bob de Jong (Opel Kadett GTE), Wim Luijbrechts, navigated by his brother Cees with Triumph Dolomite, and Rob Slotemaker (Opel Kadett GTE), this time navigated by André Jetten, are the most important Dutch registrations. Opel Kadett GTEs have also been registered by Henk van der Lee and Jan van der Marel. Walter Röhrl, the winner of 1974, does not appear at the start because he is driving the East African Safari rally for Opel.

In the 1200 km long route, approximately 197 km of special stages and special tests are included. The Belgian tests are all hardened, but about half of the Dutch tests are unpaved. All special stages are secret in advance. A number of GULF petrol stations act as route control, according to the concept of the STAR rally. The rally lasts from Friday afternoon to Sunday afternoon, with a rest on Saturday during the day in Colmar-Berg in Luxembourg. The technical scrutineering will take place on Friday 23 April at the Rijks Automobiel Centrale in Rotterdam. The start will not be held on the Coolsingel this time but in front of the Rotterdam Doelen. After the start the first test is being held on the Vlasakkers, followed by a number of tests around Nijmegen. Most participants are delayed due to the busy traffic in the city center of Nijmegen. Through trials in Limburg, including at Berg en Terblijt, the participants drive to Belgium. Here, at four o’clock at night, the police stops the further movement of the tests, after which the participants set course towards Luxembourg for the rest of the route. The first stages in Belgium present problems when the local inspectors do not appear on time. One of the tests is also cancelled because there is too much split on the road. In Limburg the rally has some delays due to the massive influx of public and after Valkenswaard a number of tests are also cancelled in the Netherlands. On the trial at Middelbeers a number of participants will be trapped in the mud, but a local farmer is willing to release them for 25 guilders per car. The organization gets some criticism for the long waiting times before the tests and the fact that signage on a number of tests leaves something to be desired.

The Italians have problems with the gearbox of the new Fiats. Verini does win the first test and knows to do this one time later, but cannot beat the Benelux leading cews. The Fiat mechanics, while replacing a gearbox in 31 minutes, allowing Verini to get involved with the battle but he can only switch to 4th gear. Markku Alèn also has problems with his gearbox on the first KP (Vlasakkers). After this has been replaced, the ignition coil must also be replaced later on. He then gets the task not to drive for the overall classification, but to go for everything-or-nothing so as to test the new Fiat material to the limit and thereby gain important experience for the upcoming rallies with the new car. In Valkenswaard he gets a boiling engine later in the rally. The competition is mainly between Lars Carlsson (Opel Kadett) and Gilbert Staepelaere (Ford Escort) who win all the tests. At the rest in Colmar-Berg Staepelaere is 43 sec. in advance, because Carlsson drove a test on wrong tires and ended up next to the road once (Papendal). At Linden aan de Maas  Bergsteijn, with his Datsun Cherry, goes too fast through a pit as a result of which his car turns around and slides on the roof for 25 meters. Rob Slotemaker is amazed during the rally about the professional behavior of the factory teams, with all kinds of tires that are changed regularly, and over the bumpy forest paths that often have to be driven at night. On the 26th special stage (Berg en Terblijt) Staepelaere drives, due to the lack of signage, the wrong roads which reduces his lead to a few seconds. On the one-before-last test (36 Alphen), the high tension for Staepelaere becomes too much. The steering wheel shoots out of his hands, he hits the road and loses several minutes and with that the rally. The crew tries to unload the car in vain, but fortunately a number of spectators are willing to help.

The final results do become official within one hour after the finish. The award ceremony is on Sunday evening at the Hilton Hotel in Rotterdam, but without cold buffet in order to limit the costs. The Italian professionals do not use the list with 30 possible points for protests that they had prepared. Verini-Russo are second behind Carlsson, followed by Staepelaere (third), Alèn and Luijbrechts. The fifth place goes to Luijbrechts, when Plas, fifth at that time, on the last special stage (Zestienhoven) fifty meters ahead of the finish has to give up with a broken drive shaft. Pannekoek-Brouwer win category 2, while the victory in category 3 is for Espelo and Schipper.

Take a look at the Tulpenrallye edition 1976 with the selection of images below that we have selected for you!