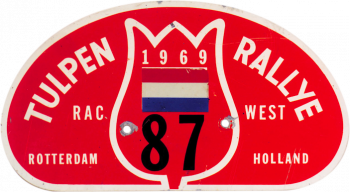 Piet Nortier has fallen ill and is no longer actively involved in the organization of the rally. It is clear for the other organizers after 1968 that the rally will have to be put on a different footing, in order to keep the financial base healthy. That is why publicity agency Markos is called on to work out a new concept. The start and finish of the rally will be held for the first time in Rotterdam, and the test at Zandvoort will come back. The business community in Rotterdam fully supports the rally, and a number of activities are organized around the event. The rally does not count this year for the European Championship for brands (but for riders, this now changes every year), as a result of which the interest of the factories for participation is limited. Furthermore, it takes a long time before the financing is completed, which leads to a somewhat late publication of the rally and this also has no positive influence on the number of participants who register. The registrations among amateurs are encouraging. This has undoubtedly to do with the lower registration fee, the fact that advertising on the cars is allowed and the awarding of cash prizes (20,000 guilders in total, also in the amateur class).

Three special stages are included in the route this year; the first of these is the Circuit of Zolder. In addition, there are of course a number of special test that must be driven by the participants within a predetermined maximum time. Through various villages in Belgium, and no longer over the motorway, the route then runs to Larochette and Sarrebourg where the mountain routes begin. The route then runs via Dabo, St. Odile, La Rothlach and then over the Cols de la Charbonnière, the Fouchy and then the Ballon d’Alsace. The weather is now playing an important role, and the ongoing rain and the abundant fog make the rally particularly heavy. In the class 0 to 850 cc everyone retires in the Vosges. Then the participants drive the Route Joffre, after which they head to Annecy via Cernay for the rest of the route. Then the teams drive towards Surier for the Night of Annecy. After Rumilly, 423 km from Annecy, the route includes the challenging Mont Clergeon (stage of 18 km) and the Sapenay. Then follows the route over the Cols du Brabant, the Fouchy and the Breitenbach. From Sarrebourg the route returns to the Netherlands for the special stages at the Vlasakkers. The teams will return to Rotterdam on Thursday, after which the cars will be set up in the Ahoy Hall in Rotterdam on Friday. Here the participants can, without the help of service teams, look after the cars in preparation for the final test at the Circuit of Zandvoort. The Zandvoort test consists of five laps over the track, preceded by two laps behind the pace car with an average of 80 km / h.

One of the big favorites, the Polish former European champion Zasada, disappears from the battle with his Porsche before Gérardmer. The Luijbrechts brothers, with DAF, are extremely unlucky. First they replace the blown windscreen with a plastic one. Then the petrol tank has a leak. They try to seal it with chewing gum (60 packs in total), but eventually get caught in a ditch where the front wheel is damaged. In Annecy, when there are still 58 participants in the race, Staepelaere-Aerts are in the lead, followed by Slotemaker-Van der Geest who have 169 penalty points. Van Grieken and De Jong lose their lead in the Grand Turism class when they leave the road on the way back in Belgium. The test at Zandvoort is almost automatically won by Rob Slotemaker, who is followed shortly by the small Belgian lady ‘Christine’.

Gilbert Staepelaere ultimately becomes the deserved winner of this 21st edition in new style. Rob Slotemaker proves once again to be at the top of the crews in the Netherlands and finishes with Ferry van der Geest in second position overall and as best Dutchman. Daf is particularly successful with Haxhe and Laurent (despite a collision on the Cote de Bienne where all windows in the Daf are destroyed) in fourth and fifth respectively and Koks just behind them as seventh. The Belgian ladies Christine Beckers and Gaby Arendt win the Coupe des Dames.

Take a look at the Tulpenrallye edition 1969 with the selection of images below that we have selected for you!