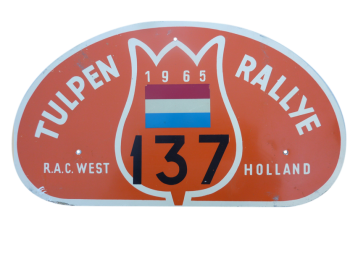 The European Championship has now been set up, which means that almost all rallies are won by factory teams that attach increasing importance to the advertising value of the championship. That is why it is almost no longer possible for amateurs to finish high in the standings, as a result of which the number of participants rapidly declines. The Deutschland Rally has already disappeared and the Tour de France has major problems to complete the organization. The organization of the Tulpenrallye recognizes this development and decides to set up an Amateur class; with 117 registrations this is immediately a success. The organization once again gets a permit for driving a route in Luxembourg during the final night. The route through Germany, which was not very popular with the participants last year, will be canceled and only a test will be held at the Nürburgring.

The 160 started teams are spread over 20 nationalities! 51 Dutch participants appear at the start. Among the participants are David van Lennep with Hillman Imp and the Finn Simo Lampinen. Timo Mäkinen, with Morris Cooper 5, is one of the favorites after victories in the Tulpenrallye last year and the Monte Carlo Rallye earlier this year. Other contenders include Peter Harper and Ian Hall (with starting number 1) with Sunbeam Tiger, the Morley Brothers with Austin Healey, Rob Slotemaker and Ferry van der Geest with a factory Triumph T2000 Saloon and Henri Gréder, this time at the start with the American William Reiber with a Ford Mustang (400 hp).

The route of the rally has again been adjusted on many points this year. There are 19 special stages and 84 controls included in the route. Two weeks before the rally, the organization is confronted with heavy snowfall in France, as a result of which the route has to be adapted on many points. In the last 40 to 50 years it has not snowed so heavily in France at this time of the year. After the start (given by Richard Burton) in Noordwijk at the Grand Hotel ‘Huis ter Duin’ for the 17th time as a rally center, the route goes to Rotterdam. The first test at Zolder will be cancelled, after which the participants will drive straight to the test at the Nürburgring (412 km) and will encounter the first snow showers and black ice on the way. Via Saarbrücken the route runs to France, where at that moment the first snowstorm rages. The Col de la Schlucht is no longer passable and a detour over Gérardmer is necessary. The organization then must also decide to shorten the test on the Ballon d’Alsace because of the snow. Just when this is being done, a French car that does not take part in the rally will slip on the Ballon and the trial must be completely canceled. At Willer sur Thur the participants pick up the planned route again and during the final test of the first night, Willer sur Thur – Col Amic is again very heavy because of the snow. The organization expects that the southern route from the next day to Champagnole (which will be held in daylight) will not cause too many problems. But, many participants get stuck and return, because the roads on the Col de la Faucille and the Mont Salève are too bad. The organization asks all participants to return to Champagnole, but can not reach most teams. Most crews continue the fight; many of them are forced to give up. Only 88 of the 128 started teams complete this loop. Some participants use studded tires and the Variomatic of the DAFs proves its value (two of the DAFs would even be connected to each other with Variomatic belts and drive up the mountains in that way). After this, the weather becomes better. From Champagnole the route goes to St. Maurice via the Col de Fouchy and the climb at Breitenbach (also the second day the Ballon d’Alsace is cancelled) via the Col du Donon to the time control at Sarrebourg. This is followed by the check at Larochette, after which the route starts in Luxembourg. The three trials here, Bourscheid, Kautenbach and Dasbourg, are free of snow, but rain, fog and the absence of the famous Tulpenrallye arrows provide new elements here. The Francorchamps trial will be cancelled, after which the participants will drive to the finish in Noordwijk via the Zolder and Zandvoort circuits.

Henri Gréder has to give up in the south, after problems with the rear axle. Also Peter Harper does not reach the finish and gives up after Champagnole. Slotemaker and Van der Geest retire in Samrée with a broken engine. With only 47 classified teams at the finish, this is the toughest Tulpenrallye held so far. The closing party will be held on Friday evening, to enable the foreign participants to complete the entire rally in one week. DAF wins the brand team prize, with all five started cars at the finish: Laurent / Marche, Ransy / Pirnay, De Schutter / Horbach, Honhof / Loos and the ladies de Fouw / Englebert. The ladies Rosemary Smith and Valerie Domleo not only win the ladies prize, they are also surprising winners in the general classification.

Take a look at the Tulpenrallye edition 1965 with the selection of images below that we have selected for you! 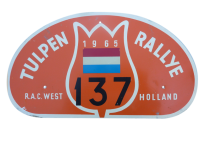