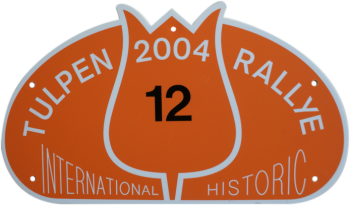 The start abroad at the 50th edition in 2003 has been a great success. It makes the route much more attractive for the participants because a large part of the first day is not lost when leaving the Netherlands from the Randstad. Beaune in France is chosen as the new start location. The Tulpenrallye has new setters this year: Adrie Brugmans and Jaap Daamen. They have won the rally earlier (2000) and throw themselves with a lot of energy on their new task. Hans Brinkman, after many years of loyal service as an expulsion, says goodbye, and this year is among the participants. RTL Nederland is making a TV program about the Tulpenrallye for the first time; a tradition that will continue for many years to come.

189 teams gather in the weekend of 8 and 9 May in Beaune for the start: 2 Vintage, 45 Tour Class and 142 Sport Class. The cocktail party will be held on Sunday afternoon in the beautiful Bastion Médieval. The route of the first day consists of a long loop through the Jura where the participants return to Beaune in the evening. The first part of the route is fairly easy to give the participants the opportunity to get into the rhythm. A number of challenges arise during the course of the morning. The organization does not yet work with a 24-hour car and has last explored the route on Saturday. In the course of Sunday, at least 20 centimeters of snow fell in places higher than 1000 meters. The route has to be diverted in many places. The route of Tuesday runs through both the Jura and the Vosges and ends in Epinal. On Wednesday, the famous mountains in the Vosges, including the Grand and the Petit Ballon d’Alsace and the Col de la Schlucht are conquered and lunch is at Restaurant Wolf on top of Le Markstein. Here too, there are still many edges with snow next to the road in many places. At the end of the day, the participants return to Epinal, where the restaurant can ensure that all teams get to eat on time. On Thursdays, the participants drive via Heudicourt to the finish in the vicinity of Epernay in the Champagne region, where they are received with Moët & Chandon champagne. Along the way they encounter a spectacular crossing through a river and an almost 40 km long regularity test on gravel roads in the Reims area. On Friday mornings there is a Route-Control on the old F1 circuit near Reims and via a route on the highway the teams continue to the west to go back to Lille in Lille. On the way to the finish in Ypres, trajectories are still being run from the 24 hours of Ypres Rally, such as Kemmelberg and Dikkebus. The evening meal is served in the Cloth Hall in Ypres. The Saturday route runs via Belgium and Zeeland to the finish at Grand Hotel ‘Huis ter Duin’. Before the lunch stop at Duinrell in Wassenaar the road book mentions that there should be a stop at playground ‘de Kooltuin’. This turns out to be Valkenburg airport, where the participants take a final regularity test. This keeps it exciting until the finish.

A large number of contenders do appear at the start. Bert Dolk won the Tulpenrallye in 1973 with Bob de Jong and later in 2001 with the Belgian Robert Rorife. He appears for the first time at the start together with Erwin Berkhof (Alfa Romeo GiuliettaSprint 1959), son of routine Jan Berkhof. Eddy van den Hoorn and Rene Smeets won earlier in 1995, 1997 and 1998 and try to win their fourth title (Volvo 122S 1965). Robert Rorife, who won in 1996 together with Roger Munda, starts with Cock Goedegebuur (Alfda Romeo Giulia Sprint 1966) and Hans van Beek, winner in 1992 and 1993, drives together with Gerard Heimerikx (Alfa Romeo Giulia Sprint GT 1964). Jan Ebus and Jan Berkhof won earlier in 2002 (Mercedes-Benz 300SL 1957) and also the winners of 2003, Karel Westerman and Martin Roosenboom, are at the start (Porsche 356B 1963). Renger Guliker (winner in 1983) starts with son-in-law Pim ‘t Hart (Mercedes-Benz 300SE 1965) and Andre Schoonenwolf, who navigated Jan Bak (1982) and Stig Andervang (1984) to victory, steps in again (Morris Mini Cooper S 1964, together with Harry Koorstra). He must clearly get used to the regularity aspects of the Historic Tulpenrallye and does not go beyond a 130th place. Anja Lieuwma was the last woman to win the Tulpenrallye (1986) and drives together with Lisa Lankes in a beautiful Austin Healey 3000 Mk III from 1964. They eventually win the Coupe des Dames.

The rally has an exciting battle and many different leaders. The German team Frans Zapfe / Anja Bögershausen (Mercedes-Benz 220 SEb 1964) are in the lead for the first two days, but on Wednesday they collapse under pressure and make too many mistakes. Rob van de Berg and Jacques Limpens (Lancia Fulvia GT 1968) led the ranking halfway through the rally, but dropped back to 69th place on Thursday. Bert Dolk and the young Erwin Berkhof (21 years old) are surprisingly on the lead on Thursday. On Friday, however, they will lose it again from van Beek and Heimerikx. On the Saturday, Dolk / Berkhof ultimately do the best things with only 3 penalty points and they pull the longest end. During the entire 51st edition they miss only 3 route checks and they collect no more than 11 time penalty points. They thus become the rightful winners. The duo Jordi van de Heuvel and Erik Hartman (MG MGB GT 1967) win the Touring Class with conviction and Ruud and Miriam Wesselink (Citroën TA 7C Cabrio 1937) are honored as winners of the Vintage class.

Take a look at the Tulpenrallye edition 2004 with the selection of images below that we have selected for you!