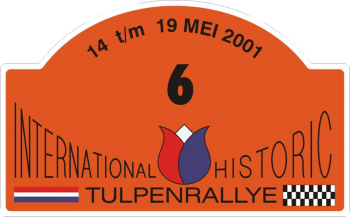 Kees Stoel withdraws after the 2000 edition as clerk of the course, but remains the chairman of the organizing committee. Abe van den Brink takes over from him as a clerk of the course and André Jetten will continue to help Hans Brinkman with the route of the rally.

The rally starts early on Monday morning, May 14 and therefore the crews are, after a lunch in Brecht (Belgium), that evening already in Verdun in the north of France, where dinner takes place in a beautiful castle (le Coq Hardi). On Tuesday we drive to the characteristic Hotel Le Lac in Malbuisson where the rally will have its HQ for two days. On Wednesday, an interesting loop is driven through the Vosges and Jura with lunch at 100 km south of Geneva, followed by another trip through the Vosges on Thursday to St. Avold. On both days a number of original routes from the Tulpenrallye of 1956 are held, including the Col de la Faucille (the highest point of the rally this year). On Friday the crews drive from Clervaux in Luxembourg to the factory of Philips Carlamps (one of this year’s sponsors) in Aachen, Germany. Philips has created an atmospheric tent where, under the supervision of a local orchestra, a German meal is consumed. On the Saturday route, the participants wait for another secret test prior to lunch at the Autotron in Rosmalen: this time on the DAF Trucks test track in Brabant. At Time Control 77, the participants receive the instruction for this special test of 9 km. With 2650 km this is the longest Tulpenrallye organized by the AMAC so far.

The German Frans Zapfe takes the lead after the first day with zero penalty points. In the following days, a very interesting fight develops in which Bert Dolk / Robert Rorife take the lead on Tuesday. They have an exciting battle in the next four days, but on Friday afternoon they increase their lead decisively on the other teams in the Ardennes. The knowledge of the terrain in Belgium of the experienced Rorife undoubtedly plays an important role in this. During the prize-giving ceremony, Dolk drives the winning Volvo into the Pické room at “Huis ter Duin” and thanks his navigator Robert Rorife on stage. Jan Ebus / Jan Berkhof are second in the Sporting class, followed by Belgians Gilbert Wilssens and Filip de Munck. The Coupe des Dames is also presented again and this year is won by the ladies Lisa Klokgieters / Anja Lieuwma with Austin Healey. The Touring class is won by Richard Veldkamp and Nico Kuiper. The couple Ruud and Miriam Wesselink this year win the Vintage class with Citroën. The newly established team prize is won by the Ebrex Rally Team with Dolk / Rorife, Ebus / Berkhof and Touw / Uitenbroek. All participants agree that this was the most beautiful Tulpenrallye of the last years.

Take a look at the Tulpenrallye edition 2001 with the selection of images below that we have selected for you!