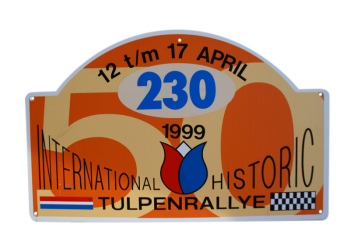 50 Years Tulpenrallye! Maurice Gatsonides dies in the autumn of 1998. The organization decides to pay extensive attention in 1999 to the fact that it has been exactly 50 years ago that the Tulpenrallye was organized for the first time. The National Tourist Board and the Keukenhof share this ambition and decide to sponsor this special edition. In good alignment between the parties it is decided to also make the route very special and a route back and forth from Noordwijk to Berlin is designed. The route is 2300 km long and as a result, the rally is one day longer and is started this year on Monday from Noordwijk.

Via Barneveld, a first stop in Münster and a second in the East German town of Arolsen, the center of Berlin will be reached on Wednesday, among other things via “checkpoint Charly”. All participants stay overnight in the Forum Hotel and dinner is served at high altitude in the “Fernsehturm” of Berlin. Via the Holländisches Viertel in Potsdamm, the participants will drive to Winterberg on Thursday. Here they end up in the snow, just like on the way to Berlin on Wednesday, after which they drive to Vaals in the Netherlands on Friday. Via the Keukenhof in Lisse, the participants will reach Noordwijk again on Saturday. The roads in the east of Germany are pretty bad. Afterwards, the organization and the participants agree that the route to Berlin was indeed a special experience, but that the next Tulpenrallye’s will again be driven to a significant extent in France.

The main contenders are Bert Dolk (winner in 1973), Renger Guliker (winner in 1983), Hilmar Andersen (winner in 1994), Dries Jetten, Eric Leerdam, Aernout Lindner, Bart Rietbergen, Don van der Vaart, Linus Verhoeks and Karel Westerman . Again many foreign participants are at the start with Horst Deumel (D), Mike Cornwell (GB), French Zapfe (D) and the Brit Neil Wilson whom appears at the start with the ex-World Championship rider John Buffum (USA). For the first time this year the Vintage class is being organized for participants with cars from before WW II. A number of very nice Bentley’s and also the Mercury Kwik-1 of Bert Kersten, designed by Maus Gatsonides in 1938, appear at the start. A total of 220 teams participate in this special anniversary edition of the Tulpenrallye.

The Sporting class is won by the experienced and sympathetic team Horst Deumel (D) / Willi Potjans (B) with BMW 2000 Ti 1967. They are followed after an exciting battle by father and daughter Renger and Ingeborg Guliker (Fiat 1600S) who become 2nd and in third place Adrie Brugmans / Jaap Daamen (Alfa Romeo). The Coupe des Dames is won by the ladies Sandra Deumel and Regine Hansche with MG-B. Martin Polak and Marco Cornelissen with Ford Cortina win the Touring class and Paul Sassen / Harry Knoop with Bentley 4.5 Liter from 1937 are the first winners of the Vintage class.

Take a look at the Tulpenrallye edition 1999 with the selection of images below that we have selected for you!