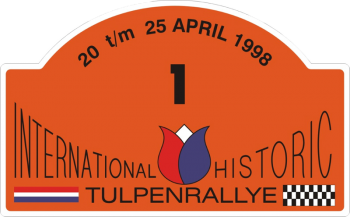 The successful rally concept of the past years is being continued. The Hotel des Vosges in Türckheim is no longer included in the route after three years, while the Floréal Club in La Roche is also no longer on the program. This time a more western route through France is chosen, allowing more driving in the Vosges. The list of participants consists largely of crews that have also been successful in recent years. Interest in the event is growing rapidly and the organization cannot allow more than 200 participants, so that new participants can hardly intervene.

The top of the list of participants is formed by Eddy van den Hoorn, Don van der Vaart, Linus Verhoeks, Karel Westerman, Renger Guliker, Bert Dolk and Paul van Doorne. Bart Rietbergen is back after two years and brings the Volvo PV 544-1965 which he drove earlier this year in Beijing-Paris at the start. The foreign contingent is led by Michael Abram, Mike Cornwell and Franz Zapfe. Christian Heussi (Switzerland) starts this year with an ex-factory Renault Alpine. Among the oldest cars are the very fast Allard L from 1947 by father and son Pieter Vos, the predominantly pop rivets and filler Triumph TR2 Sports from 1954 by Peter Pratt and the Citroën TA7 by Ruud Wesselink from 1937. The Van Heiden brothers of the Autotron start with a particularly impressive ex-Stirling Moss Mercedes 300SL Gullwing from 1955.

After the start on Tuesday, the teams will drive directly to Belgium where lunch will take place at the Waterhoek in Grazen. In the second part of that day there is an error in the roadbook so that none of the teams can achieve the described average, which of course is corrected later by the organization. The Wednesday route runs to Gérardmer, a place that has been visited many times in the history of the rally. Participants receive wine in the central square. The route of the next day in the Vosges has to be radically changed when clerk of the course Kees Stoel gets stuck in the more than 40 cm of snow on the route a day earlier. Well-known mountains such as the Petite and Grand Ballon, Col de Brabant and Col de la Schlucht are again included in the route. The participants arrive at La Petite Pierre on Thursday evening via a lunch in La Bresse. The Friday route runs via Cattenom-Sentzich near the border, via Luxembourg and Belgium to Vaals in the Netherlands. The final stage runs from Vaals, via Breukelen to the finish in Noordwijk. At the finish the wind blows very hard and it rains, so that the finish is taking place under the awning at Huis ter Duin.

Favorites Van der Vaart, Verhoeks and Van den Hoorn come to the finish on the second day in this order and put the rest of the field at a considerable distance (all of them more than 1000 points). The second day brings little changes in the ranking; only Van der Vaart drops a number of places because he is one of the few top teams with penalty points this day. One of the petrol stations in Gérardmer appears to have provided a number of participants with petrol containing water. This leads to the necessary repairs for a number of crews. Verhoeks is one of the victims and has to work their way through these problems. Van den Hoorn then takes over the lead, followed by Van der Vaart and Jetten. On Friday and Saturday, Van den Hoorn and Smeets do not get into trouble with the Volvo, and after 1995 and 1997 they win again the International Historic Tulpenrallye.

Don van der Vaart and André Jetten are second again, followed by Westerman – Roosenboom and Rietbergen – Roetgerink. Titia Westerhof and Anja van der Marel take revenge for the loss they had last year in the Coupe des Dames and win this cup again (for the sixth time). This is presented by them by Mrs Ciska Gatsonides, who won the Coupe des Dames first in 1949. The brothers Menno and Ronald Vermaas win the Touring class with Citroën DS 21 Cabriolet from 1967. Singer Rob Janssen enters the dining hall on the roof of Eddy van den Hoorn’s Volvo in ‘Huis ter Duin’ during the award ceremony and gives a dazzling show.

Take a look at the Tulpenrallye edition 1998 with the selection of images below that we have selected for you!