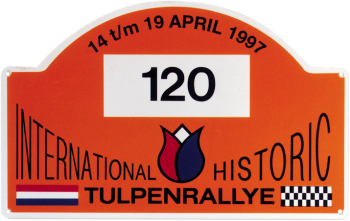 This year not an extra day will be added to the program; however, on Tuesday morning there will be a very early start. Germany is avoided this year as much as possible because of the problems with obtaining the necessary permits in that country. Fashion manufacturer State of Art acts as the new main sponsor of the event this year.

After the start in Noordwijk, the participants drive in the direction of Eindhoven, where the DAF museum is hosting lunch. The afternoon route, the traditional problems and challenges caused by the maps in Belgium; once again a number of participants arrives late in La Roche for the night’s rest. The next day the route goes via Belgium and the north of France, with a lunch in Charleville, to the north of the Vosges. The dinner is that night in Türckheim, followed by the traditional tour through the Vosges the next day. After lunch at La Bresse, the route continues north to La Petite Pierre, which was also included in the Tulpenrallye several times in the past. On Friday the route runs via Mandern, Luxembourg and Belgium to Vaals. On Saturday the teams drive via Vaals, Lent and Veenendaal to the finish in Noordwijk.

After the first day, in which only 25 teams remain without penalty points, Frans Zapfe and Anja Bögershausen (Mercedes 220 SE Coupe) take the lead unexpectedly. Van den Hoorn and Smeets are still 15th at that moment. In the second part of the second day many teams run into penalty points and at the end of this day Van den Hoorn takes the lead, followed by Guliker and Van der Vaart. Guliker delivers a unique performance on the third day by taking one of the regularity tests with exactly the right time, based on which he leads at the end of the day just 10 seconds followed by van den Hoorn. Van den Hoorn misses a control on the fourth day in the morning, which gives 300 penalty points and then the way is open for Guliker to decide the game in his favor. However he now has a broken clutch, therefore can not turn when he drives the route incorrectly and therefore misses a control. In the afternoon, Guliker still misses a control and on Saturday it happens to him again, so he will finally have to settle for a sixth place at the finish. Van den Hoorn and Smeets win the Tulpenrallye again, they missed only one of the 153 checks. They are followed in the results by Van der Vaart, Verhoeks, Westerman and Cornwell who are only 70 seconds apart.

The touring class is won by father and son Dolf and Eric Beuk from Noordwijk. The team prize is won by the Historic Rally Team Netherlands. During the prize-giving ceremony and the closing party in Huis ter Duin, Johnny Kalvin sets things up and all participants get swinging on the floor.

Take a look at the Tulpenrallye edition 1997 with the selection of images below that we have selected for you!