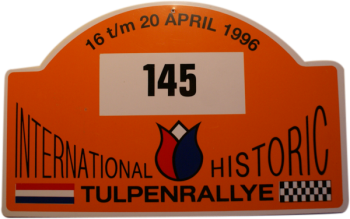 On the basis of last year’s success, another day is being added to the program. The start is already taking place on Tuesday, in order to be able to drive in the Vosges for a almost two days. The Sporting class has 146 registrations, while the remaining 49 participants are registered for the Touring class. Under number 1 this year Maus Gatsonides and Bob Dickhout do start with the replica of the Ford Zephyr from 1953. For Gatso this is his 10th Tulip while Dickhout starts for the 13th time. Together they are 155 years old and they bring more than 100 years of rally experience to the start. The brothers Martien and Paul van Doorne, grandsons of the founders of Daf, are starting in a Daf 55 Marathon that has participated in the London-Sydney Marathon in the past. Other Dutch registrations are Eddy van den Hoorn and René Smeets, Bart and Timo Rietbergen, Renger and Ingeborg Guliker, Constantius Steger and Jean van der Elst and the ladies Titia Westerhof and Anja van der Marel. Dries Jetten, (this is his 13th start in the Tulpenrallye), starts with son Piet this year in the Sporting class. Jan Berkhof is also at the start again. After previous participations in the seventies with Jan van der Marel, and a few times in the beginning of the eighties, he is this time the navigator of Linus Verhoeks. Foreign contenders are the Belgians Arnold van Dolder and Jan van der Meer, Mike Cornwell (Porsche 356-1964), Andersen-Friborg and the Brits Philip Prettejohn and Malcolm McKay (Jaguar E-type-1965).

After the start in Noordwijk the crews drive via Bergen op Zoom (the VVV there is a sponsor this year) heading to Belgium. In this country it is always difficult to find the route on the Michelin maps that form the basis for the Tulpenrallye in these years, but in the end most of the teams arrive at La Roche in the Ardennes. The second day, the route leads through Belgium, Luxembourg and the north of France to Türckheim in the Vosges. For the Thursday, a long loop was created through the Vosges containing the ballons route and the new route of the 1000 lakes. On Friday, the participants drive from Türckheim to Monschau, from where they will depart on Saturday in the direction of the finish in Noordwijk.

Munda and Roriffe (Porsche 911-1965) clearly demonstrate their experience with the historic rally work. They do all 53 time controls  and 83 route controls without penalty points. Only on the regularity stages do they accumulate 90 penalty points. Also van den Hoorn and Smeets (Volvo 122 S-1965) report at all controls correctly, but they lose the race on regularity tests. On the 20 secret time checks included in this, they get 112 penalty points more than the Belgian winners. Don van der Vaart and André Jetten fight for a long time in the top, but they fall back with technical problems. That also happens to Gatsonides-Dickhout when they get problems with the petrol pump on Friday. Unfortunately, for the first time in many years, two accidents with serious injuries are regrettably taking place. Both crews end up in the hospital in France, but come home healthy a few weeks after the rally.

The touring class is won by TV presenter Rob Fruithof together with Autovisie journalist Ron Herlaar in an Alfa Romeo of the Team Rallysport Amersfoort. Titia Westerhof and Anja van der Marel again win the Coupe des Dames. Maus Gatsonides confirms during the prize-giving ceremony that this was his last appearance in competitive sports. A standing ovation of the 600 attendees is awarded to him and his wife, winner of the Coupe des Dames in 1949.

Take a look at the Tulpenrallye edition 1996 with the selection of images below that we have selected for you!