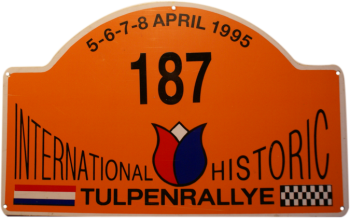 It goes without saying that the success of last year is being built on. In 1994 the organization only wanted to use one hotel during the event, because it was not possible to estimate what the travel and booking of hotels in different places would take. Because all this went smoothly in 1994, this year it is decided to make the route longer and stay overnight in different places. In addition, it is decided to return to the area where many Tulpenrallye’s have been held: the French Vosges. The rally will therefore also be one day longer and it will start on Wednesday already; the finish is scheduled for Saturday. Noordwijk naturally functions again as the starting and finishing place, while the rally is again being held according to the rules of the FIVA. Part of the roadbook was taken directly from one of the editions from the sixties. Enrollment is open to cars built before 1972 and crews can enter again in a Sporting class (113 participants) and a Touring class (70 participants).

Major foreign registrations include Nicky Porter and Andrew Bodman (Mercedes 220 SE), winners of the Monte Carlo Challenge in 1994, and Ron Gammons-Jane Bourne (MG-B), winners in Monte Carlo in 1995, the Danes Andersen and Friborg (Tulpenrallye winners in 1994), Mike Cornwell (Porsche 356), the Frenchman Diacono (Austin Healey) and the Belgians Willy Potjans (BMW) and Roger Munda (Porsche 911). The Dutch delegation includes Maus Gatsonides and André Jetten, this time with a replica of the Ford Zephyr in which Gatso won the Monte Carlo rally in 1953, Renger Guliker, together with daughter lngeborg, with Fiat 1600S, and Eddy van den Hoorn – René Smeets with the Volvo 1225. The oldest cars are the Lagonda 2L (1929) from Macko Laqueur and the Alvis Tourer (1939) from Bob Meijer.

After the technical scrutinizing in Noordwijk on Tuesday and a reception afterwards by the mayor of this municipality, at which also the formation of the Historic Rally Team Holland is announced, the participants on Wednesday drive about 500 km from Noordwijk to Arlon (known from the history of the rally and in the difficult seventies several times the turning point of the rally). On Thursday the crews reach the Vosges, where lunch is served in Turckheim. This is followed by a stage through the Vosges, in which famous routes from previous rallies have been included and the participants ride both the Petite Ballon and the Grande Ballon d’Alsace. Due to prolonged snowfall in the last weeks before the rally, this route needs to be adjusted. The route through the Vosges is experienced by the participants as the most difficult part of the rally. When they return to Turckheim it is already dark. On Friday, the route runs to Germany, with a special stage being held at the finish in Adenau on a section of the Nürburgring. Via Arnhem, Druten and Beneden-Leeuwen the caravan will drive back to the finish in Noordwijk on Saturday.

Van den Hoorn immediately announces on the first day that he is going for the victory and is leading with only 52 points in the rankings. On the second day, Andersen and Friborg advance in the ranking from eighteen to second place, while Willy Potjans and Piet van Dieten rise to second place in the rankings on the third day, coming from the eighth position. The fourth day is fairly simple and hardly causes any problems for practically anyone. Only Antoon aan de Stegge falls out of the top-20 when he inflates the engine of his car. Loek de Rooij and Peter Bezemer drive the rally with a VW Beetle from 1950. The car is still original with an old linen license plate and goes up 40 km/h against the mountains. The top speed is 110 km / h!

The prize-giving ceremony takes place again in the grand hall of the Grand Hotel ‘Huis ter Duin’ during an extensive dinner, during which the winning Volvo from Eddy van den Hoorn enters the dining hall during the presentation of the main prizes. Maries Dinaux and Eric van Straaten (Triumph TR6) win the Touring class, followed by Van de Klashorst and Levert (Triumph TR 3B). Titia Westerhof and Anja van der Marel win the Coupe des Dames.

Take a look at the Tulpenrallye edition 1995 with the selection of images below that we have selected for you!