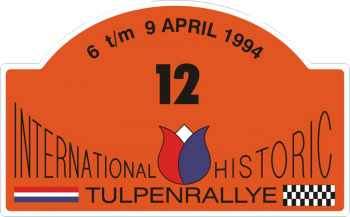 The inventive organizers of the AMAC decide to further change the rally. The European FIA championship is not getting off the ground and attracts too few participants, while further organizing special stages, even with classic cars, remains a difficult business in the Netherlands. It is decided to organize a rally that approaches the original Tulpenrallyes from the fifties and especially sixties as closely as possible. On the initiative of VVV Noordwijk director Hans Broekmeulen it is also decided to return to the roots of the rally: Noordwijk. The cooperation in this municipality is particularly large and the Grand Hotel ‘Huis ter Duin’, which has since undergone extensive renovation after a major fire, will once again serve as a location for the start and finish of the rally. The rally will now be held on the basis of the regulations of the Federation Internationale des Véhicules Anciennes FIVA. The rally consists of long road routes based on different map reading systems that have to be covered at a predetermined average speed. Along the way, various route and time controls need to be reported to and the failure to do so, including too late or too early, yields penalty points. Furthermore some tests have been included in the rally. There are again two classes. The Sporting class (101 participants) runs a longer route, and a night route in Belgium. The Touring class (57 participants) drives a slightly easier route. The rally is open to cars that were built before 1972.

The concept is particularly appealing and immediately attracts more than 150 participants. Greta Molander, now more than 80 years old, returns to the start after winning the Coupe des Dames in the 1950s. Another well-known participant is Maus Gatsonides, now 83 years, together with André Jetten in a Citroën ID 19. Dries Jetten is also present, together with son Piet in a Ferrari 250 GTE. Nick Porter and Andrew Bodman, winners of the Monte Carlo Challenge earlier this year, are also present as well as Collin Francis and Mike Cornwell with the beautiful Porsche 356 and the Danes Hilmar Andersen and Henning Friborg with Volvo. Eddy van den Hoorn starts again with the Volvo, while Renger Guliker is at the start with a Fiat 16005. Among the oldest cars are the Lagonda M4.5 from 1934 by Macko Laqueur and the Alvis 4.3 from 1939 by Bob Meijer. Dutch Healey Competition enters twenty Austin Healeys, while the Porsche 356 Club appears at the start with three cars.

On Thursday morning the participants leave from Noordwijk. Via a route control at Duinrell, from Tulpenrallye winner Count Hugo van Zuylen van Nijevelt, the course is set towards Belgium. The main rally terrain of that day is in Belgium, after which the participants arrive in Spa for a reception by the mayor. On Friday a long route has been created through the Ardennes, including a route on the Circuit of Spa-Francorchamps, and the north of France. The weather is particularly bad and the crews are struggling with rain, snow, fog and hail. At the beginning of the evening the teams return to Spa, after which there is an exciting night-stage for the Sporting class. This consists of about 250 km to be covered in five hours; the route is mainly in Luxembourg. Only a few teams are able to reach the finish line with zero penalty points, including Leerdam-Gordijn (Ford Lotus Cortina MKI-1965). On Saturday, the participants then return to Noordwijk via a lunch at the Autotron in Rosmalen where they finish during the afternoon.

The rally yields an exciting battle. The Danes Andersen and Friborg are the whole rally in the front of the standings and ultimately win the rally. They are followed by Eric Leerdam-Hans Gordijn in 24 seconds, and father and son Bart and Timo Rietbergen in 27 seconds. The Touring class is convincingly won by Dries and Piet Jetten. In the first five sections they know how to stay completely without penalty points and only run 31 penalty seconds in the final part of the rally. The award ceremony takes place for the first time in ‘Huis ter Duin’ and is a great success. The organization can look back on a very successful event and is determined to continue on this path next year.

Take a look at the Tulpenrallye edition 1994 with the selection of images below that we have selected for you!