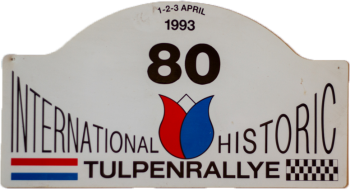 The organization is expanding the historical concept that was started in 1992 and is supported by European status this time. The Tulpenrallye counts this year towards the F.I.A. Historic Rally Trophy. For the first time since 1978 the event counts again towards an official European championship. Only the competition class is included in the Trophy. Participants (38 teams registered) must be in possession of an International license, the cars must comply with various safety regulations, such as a roll cage, and must have been built before 1966. This rally will again be held on closed special stages. The same tests are used by the regularity class (24 participants) as a regularity route which must be driven as much as possible at the same average speed. During the stage this is checked in various places by means of secret time checks.

Peter van Merksteijn and Hans van Beek are at the start to defend the title of last year, and have to compete against the Porsches of father and son Schildkamp, ​​Blok-Smeets and Ellermann-Moormann. Mike Cornwell and Keith Ferry start in a Porsche 356. Also the Porsche Classic Team from Sweden, this year on the hunt for the FIA ​​Trophy, is setting up three Porsches. Paul Maaskant starts again in the Ford Shelby Mustang of Cars of Yester Year, this time navigated by Sylvia Huisman. Other Dutch registrations are Eddy van den Hoorn (together with René Smeets), in 1991 still winner of the national class in the Tulpenrallye, and the brothers Van Thiel who are also hunting for the European title this year. Rosemary Smith won the Coupe des Dames in the Tulpenrallye in 1965. This year she starts together with Pauline Gullick in a Sunbeam Tiger from 1964.

The route this year is 550 kilometers long, including thirteen special stages (with a length of 100 km). On Thursday the scrutinizing does already take place in Barneveld. On Friday tests are being conducted in Nijkerk, Flevohof (2x), Doornspijk (known from Tulpenrallye’s in the 70s) and Putten. The route on Saturday consists of tests in Barneveld, Wijk bij Duurstede, Druten, Beneden-Leeuwen and Beuningen.

During the scrutinizing on Thursday, the necessary uproar is created when the technical inspectors appointed by the FIA ​​conclude that the three Swedish Porsches do not comply with the Annex K. The roll cages have too many fixing points and the pipes for the doors are also not provided for in the regulations. Although these cages are safer, they are not in accordance with the guidelines and also contrary to history, because in the years in which these cars were originally built such cages did not yet exist. A number of other participants, including Van den Hoorn, cut out the tubes, but Ake Andersson, Jerry Larsson and Hans Sellberg mainly opt for their own safety and decide not to start although they are basically planning to conquer the FIA ​​Trophy this year. On one of the first tests a German BMW sets flame, and it burns completely down.

Peter van Merksteijn and Hans van Beek again demonstrate the potential of their Porsche 911, prepared by Kobus Tuning. Although the car has not been driven for a single meter since the victory in the previous Tulpenrallye, the car is once again very fast. In 1992 they announced at the finish that they would come back this year with the mission to win all the tests. That does not work for them; on 8 of the 13 special stages they are the fastest. Maaskant however creates an exciting battle. He is only at 20 sec after the first day. On the first stage of the second day he immediately takes 4 back. In the next test however, he loses the rally. In dense fog on the famous test Kallenbroek he sees a right-angle turn left too late, and then runs at full speed against a small hill. The engine halts and he loses a minute and the chance of victory. Later they even have to stop the fight when the engine of the Ford starts giving too many problems. Eddy van den Hoorn loses the rally when he oversleeps and arrives too late at the start on the second. 90 penalty seconds are the result. He continues the rally and would have finished fourth without the penalty.

Hendrik Blok, who has previously gained experience with rallies in the US, is second and the debuting Frans Verbaas and Bettine Vlasman amaze many by finishing with the small Austin Cooper as third (they even win a test). Jan van der Heijden and John Bekker win the regularity class with Peugeot 404KF. The prize-giving ceremony is again on Saturday evening in the Veluwehal in Barneveld. The organization looks back on a successful rally, but is disappointed with the limited number of participants and wonders whether it is worthwhile to do so much work for such a small group.

Take a look at the Tulpenrallye edition 1993 with the selection of images below that we have selected for you!