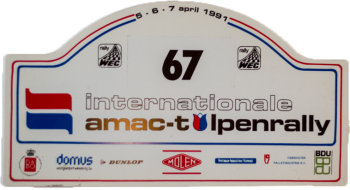 After the financial problems in 1990, the AMAC is again able to organize a Tulpenrallye. This year too, it appears that the budget cannot be funded until the four importers with the greatest interests in Dutch rally sports decide to financially support the event. The municipality of Barneveld is actually paid this year by the organization for the deployment of police and other services.

John Bosch starts this year especially in the European rally-championship, but has already decided at an early stage to also start in the Tulpenrallye. The other Dutch starters are Erwin Doctor (Opel), Jan van der Marel (Ford), Theo Knoop (Peugeot), Henk Vossen (BMW) and Chiel Bos (Lancia). The most important foreigners are the Finnish Ford drivers Juha Miettinen and Jussi Makinen, both with a Ford Sierra Cosworth in the Dutch championship this year, and Jen Ole Kristiansen with Peugeot 405 Mi.16.

The rally has sixteen special stages with a total of ‘only’ 130 km. Two AROB procedures from local residents are still running two days before the rally, but these are being declared inadmissible. The cars are technically inspected on Friday evening, where the police also carry out a special check on the papers of cars and drivers. The start is this year at seven in the morning. The Vlasakkers can not be driven in its entirety again and is limited to the Amersfoort part. At the finish-part of the special stage Soesterberg (this is also held over closed military terrain but the last part is accessible) some tens of thousands of spectators have gathered. As a result, the organization is forced to shorten the route for the second round on Soesterberg. The famous final test on the Harselaar in Barneveld is not included in the route, because the costs for the police effort on that test are found too high by the organization.

John Bosch immediately takes the lead on the first test and also wins the second. On the third test, Bosch has to wait a bit longer before the start so that the tires cool down (the BMW team works with tire warmers). He goes shortly after the start off the road and loses 30 seconds when the audience has to lift the BMW out of the ditch. The young Chiel Bos takes over the lead, but has to give up a few tests later with a faulty engine. Jan van der Marel is then in first position. Unfortunately, on the Vlasakkers he gets to do with the Tulpenrallye-bad luck he has encountered several times in recent years, when his front differential is broken. This is how Bosch and Gormley get back in the lead and keep that position until the finish. For Erwin Doctor, a high classification is important for the Dutch Championship. He can not follow the power of the BMW from Bosch and the Ford Sierra Cosworth from Miettinen with his Opel Kadett, but a third place is of great importance to him. Unfortunately he can not keep up with the Danish champion Jörgen Nielsen driving with the same car. Because Nielsen runs for the Danish dealer organization, team orders follow to help Doctor take third place. Nielsen stops a few seconds on the final test and so Doctor can pass him in the final classification.

Bosch wins his fourth Tulip Rally. Miettinen is second, followed by Erwin Doctor. Eddy van den Hoorn is the winner of the national class. The award ceremony is being held on Sunday in Hoevelaken.

Take a look at the Tulpenrallye edition 1991 with the selection of images below that we have selected for you!