The route has been forced to change this year, because the municipality of Soest does not permit the driving of a test on the part of the Vlasakkers that runs through the municipality of Soest. The incidents  of recent years where the public has come to visit the site to watch the stage, have upset the mayor, who last year himself went to look at the site. The AMAC contends the decision up to the Supreme Court, but is not able to turn the decision around. There is still a much smaller test driven on the paved part of the Vlasakkers in the municipality of Amersfoort. There are a total of 17 special stages. The stages in Barneveld are now being driven several times, and this leads to some delays in the morning. In the mid-day program some stages from the morning will be combined with each other to make longer tests. The test on the tank site of Stroe can not take place, because it is in too bad condition.

John Bosch attacks directly and Erwin Doctor loses some tens of seconds on the first stages. He is tense and his Ford is slightly less suitable for the Barneveld trials. Bosch then gets some minor problems with the ignition when the Drieënhuizen stage  is run for the second time. At the third time Drieënhuizen, Ruud Oosterbaan, the navigator of Bosch, registers at the time control too late, so they get five penalty seconds. Doctor then begins to believe in his chances. He is clearly more at ease when the tests are run for the second time and wins time back to John Bosch. Prior to the final test, the industrial estate de Harselaar with more than 35,000 spectators, the difference between Bosch and Doctor is minimal. Bosch starts first, immediately followed by Doctor. At the finish it appears that Doctor was three seconds faster than Bosch. As a result, the total time of both teams over all tests together is exactly the same. With the five penalty seconds of Bosch that Oosterbaan has added, Erwin Doctor and Theo Badenberg are the winners of this Tulpenrallye edition. There are various rumors that the turbo-pressure of the engine in the Ford Sierra Cosworth in the course of the afternoon had been further increased and that the car on the Harselaar would have over 400 hp. This will never be proven. The award ceremony is this year again on Sunday in Hoevelaken. Irma Nijenhuis-Cindy Roos wins the Coupe des Dames in Jan van der Marel’s Mercedes.

Take a look at the Tulpenrallye edition 1989 with the selection of images below that we have selected for you! 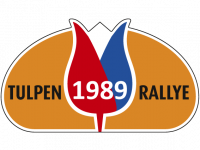