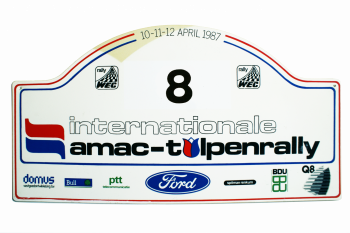 The 1-day concept with the entire rally within a radius of 20 km from Barneveld and the Veluwehal as rally center is being used again by the organizing AMAC. Hans Brinkman (route), several times as navigator at the start in the past, and Frank Pauli (public relations) are new in the organization this year.

The favorites for this rally are John Bosch with his new BMW M3, this time navigated by the Brit Kevin Gormley and Ford Netherlands driving professional Mark Lovell (navigated by the highly experienced Roger Freeman) with his Ford Sierra RS Cosworth. Other top drivers at the start are Jan van der Marel, Paul Maaskant, Henk Vossen and Erwin Doctor. The Swede Bror Danielsson, this time navigated by André Schoonenwolf is after an absence of seven years also back in the Tulpenrallye with an Audi Quattro. Jörgen Hansen is also back, while Gunnar Pettersson returns to Barneveld and starts a VW Golf GTI.

The route is largely similar to the previous years and consists of eighteen tests. It should be noted here that while a number of tests are conducted on the same sites (Vlasakkers, Stroe, Stompert, Harskamp etc.), the way in which the tests are designed is usually different. It has still not been possible to get permission to allow the public on the Vlasakkers and the tests remain secret for the participants prior to the rally. Mark Lovell however will of course do his recce. When he arrives at the Harskamp military training ground, the barrier is open. He then just continues, but is later surprised by a detonating hand grenade near his car. He tells the angry soldiers that he is looking for a campsite. The consequence of the fact that the rally has been driven for several years in the same area and according to a similar route, is that many teams are going to explore and that it is quite busy on the Veluwe around Barneveld in the weekends before the rally. The weather has a major influence on the course of the rally this year. In the morning there is a lot of snow, while it rains very regularly during the rest of the day. Most tests are therefore particularly smooth and a number of participants have a lot of problems with choosing the most suitable tires.

Lovell attacks immediately and wins the first test at Harskamp. The battle between Bosch and Lovell for the championship this year puts a lot of pressure on both. In the first rally of this year, Amsterdam BP, Bosch made a mistake and rode against a lamp post, allowing Lovell to take the win. This time Lovell makes a mistake. At special stage 5, around the waste dump of Barneveld (Kootwijkerbroek) he is getting off the road. The car remains stuck between two trees. Lovell gives up and the test is neutralized because the road is blocked for the next participants. Van der Marel is unlucky again in the Tulpenrallye when his battery breaks down on the Vlasakkers. As a result of a standard time he drops back to a 17th place.

John Bosch wins the AMAC Tulpenrallye for the third time in four years. Paul Maaskant is second and takes the lead in the Dutch championship. The award ceremony is again on Sunday morning in Hoevelaken, where all participants receive a box of Barneveld eggs. Henk Bont and Bettina de Wild, daughter of Wil de Wild who started in many old Tulpenrallye’s, win the national class (11th overall).

Take a look at the Tulpenrallye edition 1988 with the selection of images below that we have selected for you!