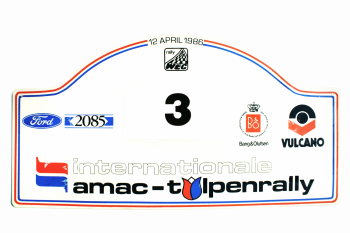 The successful concept of the previous years is further expanded by the organizing AMAC in this seventh edition of the Tulpenrallye organized the AMAC. Clerk of the course Kees Stoel has to go to Japan for business and will hand over his task for this time to Wolf Berger. Ford Netherlands takes over the sponsorship of Audi, Gulf is now Q8 in the Netherlands and Bull succeeds Wang computers as a sponsor of the results service.

For the first time in the Netherlands Ford is introducing the four-wheel drive Ford RS200, specially developed for rallying, manned by Stig Andervang and Anja Lieuwma. The Ford has more than 350 hp and is completely new; Andervang drove it only for half an hour prior to the rally. It goes without saying that John Bosch is also at the start with the further developed Audi Quattro A-2. Other Dutch contenders are Jan van der Mare-André Schoonenwolf and Guy Colsoul-Hedi van de Kimmenade, both with Opel Manta 400. Paul Maaskant starts with the Opel Kadett GSi and Peter van Merksteijn with an Audi 80 Quattro. More than fifty foreign teams are at the start in Barneveld, with names such as Jens Ole Kristiansen (DK), Berndt Steffansson (S), Tomi Palmqvist (SF), with a fast Audi Quattro A2 and Susanne Kottulinsky (S). The Brit Stuart makes the MG Metro 6R4 debut in the Netherlands. The starting field is even stronger than in 1985 and there are at least eight cars at the start in the front group that should be able to win the rally.

The route is largely similar to that of 1985, with a start at six in the morning in the morning and the finish in the early evening. At six o’clock in the morning it is still six degrees below zero, and the participants have to scratch the ice from the windows of the cars in the parc fermé. The Vlasakkers test again covers 30 kilometers, and is again included three times in the route, but with the course on the Vlasakkers quite different from previous years. Unfortunately, it has not been possible to get permission to let the public visit the tests on the Vlasakkers. Nevertheless, some thousands of spectators are on the ground. The rally sport is still growing in popularity and some tens of thousands of people are watching the event. The Barnveld police speaks of 100,000 spectators.

Andervang and Bosch are pretty well matched and both score different fastest times. Bosch wins the first test, on the second they ride the same time and after the third Andervang has taken the lead. Andervang starts the first time on the Vlasakkers with a lead of sixteen seconds. The Ford of Andervang is still fairly new and therefore somewhat vulnerable; the gearbox has been replaced once early in the race. The new bucket gives several problems again, and on one of the tests on the Vlasakkers Andervang can only use the third gear and therefore loses a few minutes. Andervang is thirteen times the fastest on a trial; Bosch six times; and once they end together as fastest. Jan van der Marel again has no luck in the Tulpenrallye, and ends with a broken head gasket. Guy Colsoul loses his second place due to a wrong tire choice at the Harskamp special stage test, which causes him to get stuck in the sand. He has to refill oil all day in his Opel, when on a jump on a test in the early morning his crankcase rips and can not be repaired. After the finish, where Bosch and Oosterbaan were honored as winners significant confusion arises. For the sake of certainty Andervang and Lieuwma were also honored with champagne for the public on the finish-podium. On one of the tests at the Vlasakkers, Bosch would have taken a wrong route. The duo has not driven a loop of about 500 meters on this test. They themselves know that probably all day, but initially the course management takes no further action against them. The rumor is getting stronger during the rally and after the finish there is a long meeting. It is already well after midnight when the organization issues a bulletin that the protest is awarded and that Bosch gets the norm time on this test, so that he falls back to the fourth place in the final ranking. It is particularly late at night when Stig Andervang is honored as the winner in the Veluwehal. Hans Poortman and Hans Knobben win the national class.

Take a look at the Tulpenrallye edition 1986 with the selection of images below that we have selected for you.