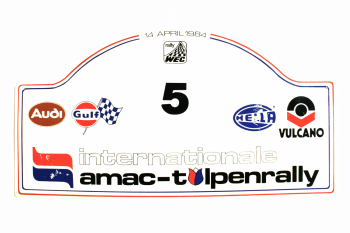 The by now very successful one-day formula from and to Barneveld is being continued and the rally is being lifted to a higher level. The growing interest in rallying from the media, the public, sponsors and also a number of Dutch car importers provide an important stimulus. Audi is the main sponsor of the event this year. The factory driver Harald Demuth acts as the zero-car driver with the particularly impressive Audi Quattro.

The Swede Stig Andervang appeared earlier this year with an old Ford Escort in the Amsterdam BP rally and won this event with a particularly spectacular driving style. On the basis of this success new sponsorship is found, from Ford Netherlands, Novotel and Vredestein, and Andervang, or ‘Stiggie’ as he is affectionately mentioned by the many Dutch fans, appears at the start in Barneveld navigated by the experienced André Schoonenwolf. Furthermore, the entire Dutch top is at the start with Van der Marel and Hoes, both with Opel Manta, Vossen with Ford, Maaskant, with Citroën, Renger Guliker with his own Porsche and André Jetten, together with Hans Brinkman, with a rented car from the same type.

This rally starts this year at six o’clock in the morning at the Veluwehal in Barneveld. The rally is largely decided on the Vlasakkers, because this test is included no less than three times in the route and is responsible for one third of the rally kilometers (3 x 30 km). The organization has succeeded in creating a very compact route. Twenty special stages with a total length of more than 200 km will be driven from Barneveld in a radius of only 20 km between six o’clock in the morning and seven o’clock in the evening. In addition to the Vlasakkers, the other tests on the military sites in the Veluwe and the interesting trials within the municipality of Barneveld, such as Kallenbroek and the industrial estate de Harselaar, are  included again in the route.

Van der Marel and Van Traa do already on the second special stage at high speed get off the road; the Opel rolls four times over and is then total loss. Andervang wins the three tests on the Vlasakkers, taking the lead in the rally. The Ford of Vossen is not running optimally and Maaskant gives up halfway. Renger Guliker can not keep up with the pace of Andervang and Schoonenwolf and is therefore second. Johnny Hoes and Theo Badenberg have to defend the colors of the Opel Dealer Team Holland, after the loss of van der Marel / van Traa, and do that succesfully: they finish third.

The official results are being published within a few hours after the finish and the prize ceremony will take place the same evening in the Veluwehal in Barneveld. The atmosphere during the rally is particularly good and the public has come down on the event in large numbers. Barneveld has become Tulpenrallye city.

Take a look at the Tulpenrallye edition 1984 with the selection of images below that we have selected for you.