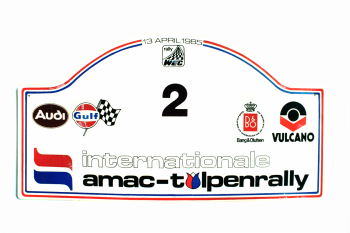 Despite a good debut in 1979, the European status for 1980 has been withheld from the A.M.A.C.. This year, according to tradition again in the spring, an attempt is made to organize a rally that will be held entirely in the Netherlands again. Opel and Gulf are once again the main sponsors of the event, while ‘De Flint’ in Amersfoort will again serve as rally center this year. The location of the tests is again secret. Co-organizer Jan Berkhof has made pace notes of all the tests and these are issued to the participants shortly before the start.

Bror Danielsson is the winner of last year under start number 1, with Ford Escort RS 1800. He is followed by the other favorites, such as Jan van der Marel and Bruno van Traa, Dutch champion in 1979, with Opel Kadett GTE (and still not with the earlier announced very fast Opel Ascona 400) and the Norwegians Jölsen-Lie with Vauxhall Chevette. The Danes Jens Ole Kristiansen and Morten Spiro (both with Opel Ascona) follow with number 4 and 5. The entire Dutch rally-top with Henk Vossen, André Jetten, Renger Guliker, John Bestebreurtje and Ko Faas is of course present at the start. Interesting registrations are furthermore the French factory driver Bruno Saby with Renault 5 Alpine and the Swede Kjell Melin, who will often return in the coming years. Among 112 participants at the start, there are 28 foreign teams.

25 special stages are included in the route (total almost 200 km). After the technical scrutinizing on Friday April 18, participants start at ten o’clock in the evening. On Saturday morning at 6.30 am the crews return to Amersfoort to leave at 9:30 am. In the night trajectory from Friday to Saturday the special stage at the Vlasakkers near Amersfoort is being included twice. There is also a test of only 1200 meters on the karting circuit of Driebergen. Bruno Saby has explored that test prior to the rally in a kart and therefore sets ne of the fastest times. In the daytime program of Saturday (at 7 o’clock in the evening the finish is in Amersfoort) there are some special stages that will come back many years later in the route. Such as the military training ground Stroese Zand along the A1 in Stroe, a test on the Flevohof, a test at the ‘t Harde shooting camp and the final test at the Harselaar industrial estate near Barneveld.

Danielsson and Van der Marel are very well matched and are involved during the whole rally in an exciting battle. Danielsson almost immediately loses more than two minutes to Van der Marel when he can only use the third gear in the second part of the test on the Vlasakkers. They are followed by J.0. Kristiansen and T. Jölsen, who follow closely enough to retain the attention of both leaders. Henk Vossen changes a complete gearbox on the road in 24 minutes.

The battle for the first place during the rally is mainly between Van der Marel-van Traa and Danielsson-Vogt, and is finally decided in favor of A.M.A.C.-member Jan van der Marel. Bror Danielsson has only 62 seconds behind at the finish line. Bak and Bouwhuis win the national class, with Porsche Carrera, followed by AVD policemen Paul Maaskant and Ruud Oosterbaan. The award ceremony is being held on Saturday evening after the finish in Amersfoort in ‘De Flint’. There are again two F.I.A. observers at the event, and the organization hopes that they will positively advise on a possible renewed European status for the rally next year.

Take a look at the Tulpenrallye edition 1980 with the selection of images below that we have selected for you!