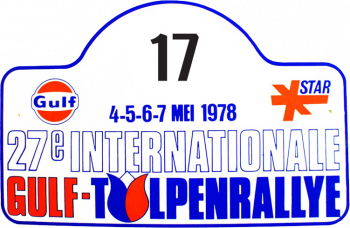 The concept of 1977 is in general applied again, and a part of the rally is once again held in Belgium with Arlon as a rest and turning point. The organization has a lot of problems this year and rumors have been going on for a long time that the rally will not take place. The financial guarantee is one of the largest problems, but this is ultimately resolved by Gulf. The regulations will only be published one month before the rally, which is the most important cause for the fact that hardly any foreign factory cars appear at the start.

The route of the rally is secret again, but many teams do recce the area in which the rally is being held in advance. The 1977 Russell Brookes trick is banned in the regulations this year. He had organized an exploratory car that ran the tests one hour before the rally caravan and made pace notes. These were then handed over to Russell Brookes and Peter Bryant in a closed envelope by the special stage chef. Because the route of the rally is secret it only gets a low rating for the European Championship, because the F.I.A. prefer rallies that can be explored three weeks in advance. The top-crews do of course go on the road to recce the route and the route of many tests do leak out before the start of the rally. This creates the necessary tension between the organization and a number of drivers. To further discourage recceing in the Tulpenrallye, this year’s regulations state that during the driving of the tests no pace notes and / or detailed maps may be present in the cars. Inventive navigators also find a solution for this; the notes are thrown out of the window before the finish, memorized before the test or hidden in the crew’s underpants before the finish. Afterwards, the organization announces that this has probably been the last secret Tulpenrallye.

The most well known participants are Brookes-Bryant with Ford Escort RS 1800, also active in the previous Tulpenrallye’s, Gilbert Staepelaere from Belgium, Bror Danielsson from Sweden and the complete Dutch rally-top with Jan van der Marel, André Jetten and Henk van der Lee and John Bestebreurtje. There are two women’s teams at the start this year: Randi Tangeland and Ellen Syberg from Scandinavia and the Dutch team Titia Westerhof and Anja Beltzer.

For the first test at Zestienhoven airport, the license is withdrawn the day before the start. The battle therefore begins after the start at the Doelen in Rotterdam at the Vlasakkers in Amersfoort. After this two more tests are being held at the military areas’ around Amersfoort, where the test on the tank track in Stroe is particularly bad, as a result of which many participants get stuck. The gravel test that follows on the Dikkenberg near Rhenen, has a length of more than 10 km. The tests in the Netherlands are run under sunny conditions and therefore with a lot of dust. In Belgium it starts to rain and the first test can not continue here, because the necessary permits are not available. On the test at Marche it is possible to cut off part of the route, which is only known to a limited number of crews. After the rest in Arlon, the participants return to the Netherlands. It then rains again and things go wrong in the organization. On the test at Celle in a dangerous bend several teams get off the road. The towing of these cars causes delays, after which a number of officials leave the test. Therefore it is possible that a regular road user drives on the test in opposite directions and collides with a participant. This in turn leads to the cancellation of this test from the result. If another test is then canceled, the rally will no longer have enough stage kilometers to count towards the F.I.A. championship. The rally has a total of 32 tests. On one of the last tests, KP 30 at Goirle, the route is not properly indicated by signs and as a result of this a number of crews are getting off the road.

Russell Brookes and Peter Bryant set the tone with a fastest time immediately on the first test and are the fastest on most tests afterwards. Staepelaere-Bessem do win back a bit on the Belgian tests, but at the break in Arlon Brookes has already eighty seconds ahead. Martens-Van Waardenburg have already withdrawn by then. Somebody else has eaten a few months ago under the name Martens in a hotel and also stayed in the hotel without paying and he must therefore go to the police station of Huy. Brookes is heading straight for victory, even though he gets off the road in a smooth turn on one of the last tests in Belgium.

Staepelaere-Bessem do register 15 minutes too early. Initially this is not penalized by the organization. Danielsson – De Jong protest against this, after which the Staepelaere’s team do protests against them. This last protest is not awarded as a result of which both teams change places in the classifications. Danielsson is second and the Belgian Staepelaere has to settle for third place. Brookes and Bryant eventually win the 27th Tulpenrallye with almost two minutes ahead of the next crew. The ladies Titia Westerhof and Anja Beltzer win the national class, and are also the best classified ladies. The awards ceremony at Motel Gilze Rijen is not that festive given the many tensions between organization and participants.

Take a look at the Tulpenrallye edition 1978 with the selection of images below that we have selected for you!