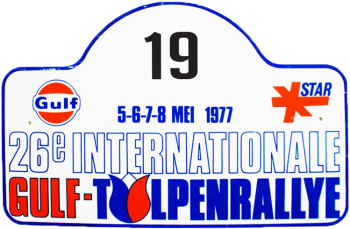 The Gulf Tulpenrallye is starting to regain something of its former glory, after the difficult editions in the early seventies. The enormous enthusiasm of the large group of inspectors and officials plays an important role in this. There is no permission to drive in Luxemburg this year.

A number of foreign participants with (semi-) works material do appear at the start. The favorites include the numbers 1 and 2 from 1976, Carlsson-De Jong with Opel Kadett GTE and Staepelaere-Bessem with Ford Escort 1800. The foreign professionals participating are the winners of the Safari Rally Shekhar Mehta and Yvonne Pratt with Datsun Violet , Brookes-Bryant with Ford Escort, Tony Drummond with Ford Escort, Eklund-Sylvan with a Saab 99 EMS and John Taylor (Ford Escort) who is well known from the rallycross in Valkenswaard. The ladies-team Titia Westerhof and Lilian Andela, composed by Veronica TV and Opel, make their debut during this rally.

The technical scrutinizing takes place on Thursday at Zestienhoven airport near Rotterdam, after which the crews start at De Doelen on Friday in Rotterdam. The 36 tests included in the rally are in total about 180 km long, of which more than 115 km is hardened. The first eleven trials of the rally are in the Netherlands. The trials on the military sites are again included in the route. The first test after the start in Rotterdam is on the Vlasakkers in Amersfoort, while the second test on the tank track of the Wittenberg army camp in Stroe has to be cancelled. The following tests are the Dikkenberg in Rhenen and the sports center Papendal. Then, via a route through Belgium with seven special stages, the  crews drive to Arlon where on Saturday during the day the participants take a rest. On Saturday night the crews drive back from Arlon to Rotterdam, again through seven tests in Belgium and eleven in the Netherlands. The final test, accessible to the public, will be held at Zestienhoven airport. All other tests are secret in advance, to prevent the participants from recceing. Nonetheless, the top teams are on the road before the rally, driving thousands of kilometers. Based on the route of previous years and rumors, the crews do drive in areas where a trial is expected this year. The route runs via the Veluwe and South Limburg to Liège where a short rest is held.

The atmosphere is tense prior to the rally, because Staepelaere and De Jong, in particular through the media, are constantly discussing prior knowledge of other rallies. Ford factory driver Russell Brookes, partly at the start because his sponsor ‘Andrews Heat for Hire’ recently opened a branch in Belgium, takes the lead from the outset and has ten minutes ahead of Staepelaere after ten tests. However, Brookes makes a mistake on the 15th test and then loses most of his lead. On the 16th trial, at Marche in Belgium, Brookes goes off the road because there is ice. Staepelaere takes over the lead. When Carlsson gets at the end of the night on the tests in Belgium (it is pouring with rain at that time) one minute behind, he decides to start the counterattack. The Escort of Staepelaere can not deploy its horsepower  on the slippery roads and Carlsson benefits from this: at the break in Arlon, his backlog has been reduced to 32 seconds. Brookes is at that moment exactly as much behind Staepelaere-Bessem. On the first tests of the back-route, Brookes is faster than Carlsson and the end result seems to be certain. Carlsson also gets off the road on one of the trials near Maastricht. Carlsson continues to attack, but later gets off the road on a trial and after that spins on the test on the military area PIROC near Eindhoven. Fifty kilometers before the finish however, Staepelaere breaks his throttle cable. Brookes smells the victory and then decides to play all or nothing at the final test at Zestienhoven. With this attempt, a stub axle breaks as a result of which he stays in third place at which he has actually driven all day. Per Eklund also almost loses his fourth place when he cannot run more than 3500 rpm at the last three tests, due to problems with its engine. Jan van der Marel and Jan Berkhof take this place from him, but fall back when they get five minutes of penalties because they have been speeding between Turnhout and Veldhoven.

Staepelaere and Bessem eventually win the rally. The prize-giving ceremony is delayed by three hours due to a number of protests and shortcomings in some cars detected during the post-scrutinizing. Especially the Fords have problems here. These cars, including those from winner Staepelaere, are equipped with a non-official mechanical handbrake. When the cars are approved anyway, Opel is considering to protest. De Jong opposes this because he thinks that the Ford team Staepelaere-Bessem has rightfully won. The national class is won by Van Espelo-Van Lent with Opel Ascona. The award ceremony is again at the Hilton Hotel in Rotterdam.

Take a look at the Tulpenrallye edition 1977 with the selection of images below that we have selected for you!