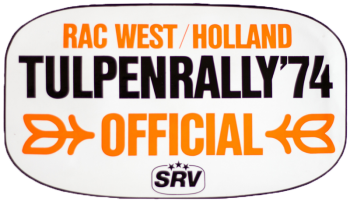 When the Polish government does not approve a repeat of the rally from last year between 22 and 27 April during the spring, the Tulpenrallye seems to be dead. Due to the petrol shortage, all motor sport is prohibited in Poland. Bob de Jong and André Jetten set up the Dutch Rally Foundation with the objective to organize a Tulpenrallye on Dutch soil together with the Tulpenrallye committee. It is assumed that there will be about 30 special stages on completely closed roads, with connecting routes between them with a very low average speed. A committee is set up with, in addition to De Jong and Jetten, Maarten van Wamelen (sponsoring), Willem Reij, Jan Hulsker and Ton Zwikstra as chairman. The sponsorship of 75,000 guilders is being confirmed (Transavia, Uniroyal and SRV are the main sponsors), and Autovisie guarantees the fine to the F.I.A. in case the event cannot continue. The team works day and night and manage to start the rally on 26 April. 1300 officials and inspectors are active during the event. They want the rally to be a model rally in all respects and to show that it is indeed possible to host a rally with international allure on Dutch soil.

Among the competitors is Opel Crack Walter Röhrl, second in the European Championship last year. The Swedish crack Lars Carlsson also drives an Opel. Other foreign participants are Ingvar Carlsson, the Portuguese Borges, the Hungarian champion Ferjancz Zsembery, the Polish driver Robert Mucha and the Belgian favorite Gustayson. Kees van Grieken, with a Ford Capri from Hertz Car Rental, Man Bergsteijn, the leader in the Dutch championship standings, and Rob Slotemaker are the most important Dutch representatives.

On Friday afternoon the participants start in Amersfoort for the southern loop of about 600 km. On Saturday morning the crews return to Amersfoort for a rest of six hours, after which they start in the afternoon for the northern loop of 650 km that ends Sunday morning. In order to prevent damage to the roads of the stages the crews cannot freely recce the stages in advance, but there is a guided exploration during the two days prior to the rally. The rally has eleven time controls and over thirty special stages. One of the tests, the Transavia trial, will be held at Schiphol-Oost. The route takes place around a Transavia airplane, in which the press photographers can install themselves to take pictures. Other tests will be held at the Goffert stadium in Nijmegen, at the Beekse Bergen in Tilburg and at the Vlasakkers near Amersfoort. A number of tests will be held on motocross circuits. For various reasons, eleven of the planned tests cannot take place during the rally. Noordwijk does not want to lose contact with the Tulpenrallye and when the participants visit the resort, all cars are being fitted with flower garlands.

Röhrl was caught early in Waardenburg at 96 km / h in a place where the speed limit is 70. The policeman of the control claims that it would be number 1 (the number of Röhrl), but the photo is not yet developed at that time. Röhrl denies and wants to continue at his own responsibility, which the organization allows him. Later on the picture shows that it is number 7. The Pool Gierowski is then being disqualified. Of the planned rest in Amersfoort, only half an hour is left because of the delays in the tests during the previous night in Brabant, so that the participants do not start fully prepared for the second loop. Röhrl has a four minute lead at half time, followed by Carlsson who is only 18 seconds ahead of Borges. In the second loop, a number of tests are being cancelled when participants remain stuck, and that is also why the planned test on the beach in Noordwijk does not take place. The last test on the Vlasakkers can not take place, because of the fact that too much public has come down to it (at least 15,000 spectators, in some media 150,000 are mentioned).

Walter Röhr! and Jochen Berger win the rally with more than four minutes ahead of the second placed crew..

Take a look at the Tulpenrallye edition 1974 with the selection of images below that we have selected for you!