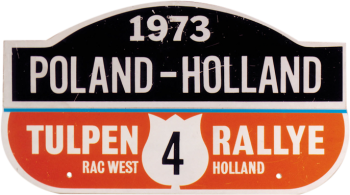 The magazine Autovisie introduces the idea in 1973, after two years without Tulpenrallye, to organize a next edition of the event in Poland. The idea is picked up by Maarten van Wamelen who is considered the great animator of this edition. The organization committee consists of Nortier, Zwikstra, van Wamelen, Hulsker, Jansen Venneboer, Hamel, Bos and Rijshouwer. The roadbook is made by the experienced navigator Jooks Klein, based on the famous tulips system. Calanda is the first major sponsor of the event and director Verwey is committed to recruiting the other sponsors. 120 local officials are deployed, while only 10 Dutch officials join the rally. The participants drive to the start in Warsaw on their own. One of the problems is that the best gasoline in Poland is octane 98.

The number of registrations of 61 is disappointing, and only just enough to maintain the European status of the rally, especially when one considers that 20 of them start in the national Tulpenrallye in which the program is slightly less task-setting. The rally promises to be particularly heavy, and cannot be compared to the French editions from the past.

Participants do ultimately not include the Polish crack Zasada (ex-European champion); he is not very satisfied with his high start number (factory Opel Ascona). Also the announced Marlboro-sponsored factory Lancia’s Fulvia are not present. However, there are four cars from the team Polski Fiat of the factory. The most important Dutch contenders are Kees van Grieken – Rob Wiedenhoff with BMW 2002ti, Wim and Kees Luijbrechts with the Gulf STAR DAF 66, Bert Dolk and Bob de Jong with Opel Ascona and the Radio Noordzee team with Datsuns for Han Tjan-Dirk Buwalda and Theo Koks-André Jetten. André Jetten rides his first Tulpenrallye this year, and is a nephew of the successful Dries Jetten, who participated in many previous editions.

The route includes eleven special stages and five special tests are included. The first part of the route is formed by the 1029 km to Wista which have to be driven with an average speed of 66 km / h, followed by a rest of two and a half hours. After this, three special stages follow shortly after each other, followed by five special tests. stages. These routes must be driven at average speeds of around 100 km / h. The stage of Sokolec is the most challenging and must be driven three times; each time with a higher average. After another test, the participants reach the border with East Germany. For the trip through Germany to the border between East and West, five hours is planned. At the border, at Helmstadt, is the first rest. Three more tests were made on the route through West Germany. There are two tests in the Netherlands; at Oldenzaal, the Holterberg (with 5000 spectators early in the morning) is climbed and rides on the southern loop of the TT Circuit in Assen are also included. Via the Afsluitdijk the participants then set course towards Schiphol Airport where the finish will take place at the Aviodome.

The Opel Ascona of Dolk and De Jong, supported by Dutch the General Motors dealer association, is accompanied by three service cars containing 40 tires and more than 300 liters of petrol from the Netherlands. All seven DAF’s retire in this rally. Beforehand it was already predicted that most of the tests would be too fast for the Dutch product, while most of the cars are simply being destroyed during the trip. Bert Dolk leads for a long time in the first phase of the rally, but before the break in Wista, he incurs a delay. After Wista he rapidly resets this by a number of fast times. Van Grieken also gets penalties by not clocking in at the right time during a control, as a result of which Dolk takes over the lead. Dolk and De Jong are supreme in this 23rd edition and eventually secure their win. The team Zegwaard-Bruin wins the national class.

At the finish a large number of protests follow, partly due to the lack of communication between the participants and the Polish officials and due to different interpretations of the neutralizations described in the regulations.

Take a look at the Tulpenrallye edition 1973 with the selection of images below that we have selected for you!