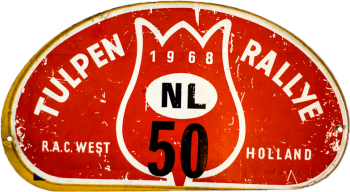 The Tulpenrallye, together with the Monte Carlo Rallye, is one of the two most important events in the European Championship, which consists of sixteen rallies. Organizing rallies in Europe is becoming increasingly difficult with growing traffic, but thanks to good contacts with the authorities in Belgium and France, the Tulpenrallye has been able to present a high-profile event to the participants every year. Nevertheless, there are some dark clouds above the event. BP International withdraws as a sponsor and the remaining support from BP Netherlands is an insufficient financial basis. Negotiations with a new main sponsor are unsuccessful, but at the last moment the rally is rescued through the support of a number of smaller sponsors.

Luxembourg is not included in the route this year. The number of special stages has been increased, while the number of special test has been reduced in order to give the amateurs a better chance to stay close to the factory teams. In addition to the fixed time checks, a larger number of additional checks have also been included in the route. The technical scrutineering is again very strict. To prevent tampering with the engines, these are being sealed at the start and secret technical inspections are planned along the way.

Vic Elford does not start, due to obligations at the 1000 km of Monza. Well-known names at the start are Ove Andersson-Davenport with Ford Escort, Hannu Mikkola with Datsun, Timo Mäkinen with Mini Cooper and Larousse with Renault Alpine. The competition Alpines have only been completed two days before the rally and are being used in rally competition for the first time. Other acquaintances at the start include Gilbert Staepelaere, Roger Clark, Andruet (also with Renault Alpine) Gerard van Lennep with Shelby Mustang, Ben Pon with VW Beetle 1500 and Rob Slotemaker with Rob Jansen in a BMW 2002. The DAF 55 makes its rally debut in this Tulpenrallye.

More than half of the cars appear at the start with extensive advertising, because nothing is stated in the regulations of the rally about this. The KNAC does not allow this however, so all advertisements must be removed from the cars. The rally has 22 special stages and special tests. After the start, the participants will complete two special stages in Zolder and La Reid (hill climb). The crews then arrive in Sarrebourg in the Vosges via a simple route. Well-known routes such as the Col de la Charbonnière, Ballon d’Alsace, Col de Fouchy and Route Joffre are again included in the route. An entirely new test has been set out at St. Odile. From St. Maurice sur Moselle the route then continues via Morez, Croisette and Mont Salève to Annecy. The participants can then rest here before they start a night through the French Alps. The route is similar to that of last year, but now in the opposite direction. Also now this route is very challenging, partly because there is still some snow on the road and many teams do incur penalty points. In Rumilly, in the parking lot at Chéval Blanc, the next day starts with a two-hour rest, followed by the special stage on the Mont Clergéon. The route then goes via the Col de la Faucille, Cote de Bienne, Belfort and the Ballon d’Alsace over the Cols du Bramont, the Brabant, the Fouchy and the Breitenbach to Sarrebourg. In Belgium a whole new route is being integrated in the rally, including the climb at La Roche and a special stage around the Route du Mond. The final test is then on the Vlasakkers near Amersfoort, as it has been decided to abandon the Zandvoort test because in the past this has led to increasingly full roads to the circuit.

Larousse is in the lead at the start of the second day, but immediately incurs a number of penalty points. Staepelaere then leads, followed by Andruet a few seconds behind him. Then follows the descent from the Ballon d’Alsace to the Lac d’Alfeld. Only the two Renault Alpines reach the average of 79 km / h. Staepelaere also tries, but leaves the road and his Ford Escort is total loss. The DAFs are also showing their best side on this test. Claude Laurent and Theo Koks, together with Jaap Dik, are the fastest in their class with the DAFs. The Intermediary classification in Annecy consists exclusively of top riders: Andruet leads, followed by Clark, Andersson, Mikkola and Larousse. The differences are very small. The night in the Alps is challenging. The pressure becomes too much for andruet;  both Ford Escorts come closer and he decides to give up. Gerard van Lennep also has to give up after the Ballon d’Alsace with a broken rear axle. On the Col de Bramont the weather is bad and the leader in the touring car class, Timo Mäkinen, gets off the road at high speed. He lands 7 meters lower in a pasture. After half an hour he finds a farmer who puts his car back on the road with a tractor. Spectators have already removed the rally plates from the car. Mäkinen goes for it again and in the next trajectory of 150 km he is back on time. However, a victory is no longer there. The final test on the Vlasakkers provides the necessary fireworks, but does not bring any changes to the classification anymore. Slotemaker thinks he has won the classification in the touring cars at the finish. Unfortunately, the results centre has made a mistake that is corrected and then he ends in second position. Larousse loses the rally by taking a wrong turn in Belgium; he discovers that too late.

At the finish all participants agree that the 20th edition is the best Tulpenrallye so far. Roger Clark and Ove Andersson prove the enormous potential of the new Escorts and finish respectively as first and second, ahead of Lunenius with the Datsun and Larousse with the Renault.

Take a look at the Tulpenrallye edition 1968 with the selection of images below that we have selected for you!