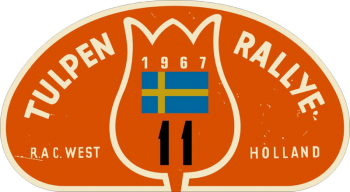 The organization is trying this year to further improve on the particularly successful edition of 1966. Based on the support of BP, the event is being further professionalized. For example, press conferences are not only given in the Netherlands prior to the rally, but also in Frankfurt, Stockholm and London. Part of the route in the French Alps near Montriond is cancelled due to the snowfall before the rally and a small landslide. The tent for the technical inspection in Noordwijk is blown away through the strong wind on the Friday before the rally. Björn Wäldegaard and Ake Andersson both start with a Porsche. Other favorites are Vic Elford with Porsche, the Pool Zasada (Porsche), Pat Moss with Saab, the Coopers S from Timo Mäkinen and Rauno Aaltonen and Peter Harper with the fast Hillman Imp. There are factory DAFs at the start for Laurent-Coolen, Rosenblatt-Honhof, van Lennep-Klein and Simo Lampinen with John Davenport. Other Dutch starters are Maarten van Wamelen-Wim Loos, Ben Pon with Volkswagen Beetle, Gerard van Lennep with Ford Mustang and Rob Slotemaker-Rob Gorris (BMW 2002).

The route is about 500 km longer than in 1966, due to an extra night in the Alps. There are again eighteen special stages (95 km), of which five are completely new in the Tulpenrallye, and eighteen special trials  (193.4 km). The start is early Monday morning. On the circuit of Terlaemen, the first special stages are held, followed by the climbs of La Reid, Kautenbach and Bourscheid (the latter two will be cancelled). Via Sarrebourg then follows the route through the Vosges with three trials and six special stages. On Tuesday morning the participants arrive in Annecy, where they can rest until eight o’clock in the evening. This is followed by a night in the Alps that is particularly heavy, with many routes from the Rally du Mont Blanc that take the participants to 1700 meters and higher. After a short rest in Rumilly, the climb of the Col de la Faucille follows as well as a route from St. Claude to Morez. Via the famous Route Joffre and the Balton d’Alsace the participants arrive in St. Maurice sur Moselle. The crews return to Sarrebourg via the Col de Brabant, Col de Fouchy, Trois-Epis and the new test in the Forêt d’Obernai. The crews will drive to Larochette without major problems, and then on the climb from La Roche to Samrée. After a climb at Malmédy, the participants enter the Netherlands. The last two tests are the military terrain in Leusden (Vlasakkers, secret) and the Circuit of Zandvoort. After four days of Tulpenrallye, the crews arrive again in Noordwijk on Friday morning at ‘Huis ter Duin’.

Vic Elford is unapproachable from the very first tests and immediately takes the lead. Although he is still driving against the wall of a tunnel (Col des Aravis), because there is ice in the tunnel in the dark, this damage is quickly remedied by the professional service. Rauno Aaltonen experiences the same in the same tunnel. Vic Elford wins this edition of the Tulpenrallye, due to his victory in the GT class. Timo Mäkinen is the winner at the touring cars. Top Dutch rankings are for Rob Slotemaker (7th), Ben Pon (11th) and Dries Jetten (15th).

Take a look at the Tulpenrallye edition 1967 with the selection of images below that we have selected for you!