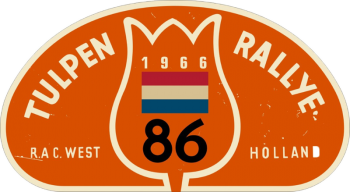 Until 1965 the Tulpenrallye was financially supported by a Council of Assistance, consisting of DAF, Vredestein, Esso, BP, Caltex, Shell and the National Flower Bulbs Committee. In the first 17 years of the rally, these companies jointly invested one million guilders in the rally. In 1965 it was announced that this financial support would stop. Fortunately, organizers Piet Nortier and Sybren Roest have managed to interest BP International (main sponsor) and BP France (paying all oil and petrol for the 50 highest ranking amateurs) to take over the financing of the event. Busy traffic makes it increasingly difficult to organize international rallies. It can only be done if one bypasses busy traffic routes and organizes the tests on closed roads. The police in France have to be paid for closing and managing the roads for the trials. The Tulpenrallye is being driven for the first time according to the new Annexe J of the F.I.A. Group 1 for series touring cars of which at least 5,000 have to be built, group 2 for touring cars of which 1,000 have been built and can be further modified and group 3 for the Grand Turisme cars of which 500 are built. This year, for the first time, the various systems of handicaps and coefficients that have been made in the past for a general classification will be abandoned. It is now based on just ‘scratch’, where the participant with the fastest time wins the final classification, regardless of the fact in which class or car he or she is driving. Organized service for participants on the way is forbidden. Nonetheless, an Orange Citroën Break of the Racing Team Holland is running and Erik Carlsson is then accidentally picked up along the route by a Swedish tourist in a Saab when his engine problems have forced him to retire.

The De Wild brothers register with a Volkswagen 1600 TL that has not yet been homologated at that time. The F.I.A. in the end only meets on the day of the start of the rally, as a result of which they can not participate. Rosemary Smith will not start either; she prefers the Shell 4000 which is run in Canada at the same time.

The rally consists of two full days and two nights, in which the crews constantly drive on. There are eighteen special stages, six of which have never been in international rallies before, and a large number of special trials. A number of tests in the Vosges is the same as in 1965, and because there is not much snow this year these could all be driven as well. For the first time, a test will be held on the way back at the military training ground the Vlasakkers near Amersfoort. The secret test at Soesterberg airport is also new. For the deposition of both tests, 2,000 straw bales are required. The route leads to Geneva again.

After the start in Noordwijk, the first test is at La Reid with a length of 2.5 km. The second test is the famous climb from La Roche to Samrée in Belgium, followed by the climbs of Kautenbach and Bourscheid in Luxembourg. In the Vosges, the well-known trials of Charbonnière and Ballon d’Alsace are included in the route, while on the way back the tests of Ballon d’Alsace, Col de Bramont, Trois-Epis and Breitenbach are also being driven. Before starting on the way back, however, there is first a southern loop to Geneva containing the trials of La Croisette, Mont Salève and Col de la Faucille. Further on in the north, on the way back, the Bourscheid trial will be driven, the Route de Mont in Belgium and the two trials of Leusden (the military sites of the Vlasakkers and Soesterberg) with the test at the Circuit van Zandvoort as conclusion . On Friday, a slalom will be set out in Noordwijk, which does not count for the classification. The Pool Zasada puts his Steyr Puch here on its roof.

The contenders this year include Erik Carlsson (Saab) and Peter Harper who starts with a Sunbeam Tiger under number 1. Other well-known registrations are Simo Lampinen (Ford Lotus Cortina) and Vic Elford (Ford Lotus Cortina). Rauno Aaltonen and Timo Mäkinen both start with factory-Coopers S. Both gentlemen have a toss, and Aaltonen wins the seat of the much faster group-2 version, after which Mäkinen has to do with the standard group-1. Among the Dutch favorites are the two Porsches 911 of the Stichts Racing Team with Gijs and David van Lennep and Joop Heidendahl-Jooks Klein. Dick Schwarz-Gerard van Lennep (Fiat 2300), Rob Gorris-Bob Boekhout (BMW 1800), Dries Jetten-Jan Horbach with Opel Rekord and Rob Slotemaker-Ferry van der Geest with Alfa Romeo GTA also belong to this category. Pat Carlsson Moss and Elisabeth Nystrom have swapped the Saab for a Plymouth Barracuda this year.

Slotemaker is looking forward to the event this year. Together with his co-driver Ferry van der Geest, whom he swapped for the Italian lgnazio Giunti whom was first assigned to him by the factory. He starts fast in Noordwijk and is the fastest on the first test, together with the Van Lenneps. The second test is also won by ‘Sloot’. Slotemaker is not really known for the careful handling of the equipment and on the fifth test he has to give up with a broken axle. Vic Elford is in the lead after the sixth special stages, followed by Peter Harper. The Van Lennep brothers are then third. Halfway through the rally, Rauno Aaltonen takes the lead with the BMC Cooper and the Van Lenneps sink back to fifth place. Gijs and David van Lennep fall even further in the second part, due to problems with the tires and the clutch. In Morez, the Saab factory technicians are replacing the clutch in one of the cars. For this the engine must also be removed and re-installed and they will do the whole job in 31 minutes. After this they take a gas burner out of the car and fry a chicken. Unlike previous years, there are no protests at the finish this time; proof of the fact that the rally went well and the atmosphere is optimal. Rauno Aaltonen and Henry Liddon win the final classification. Dries Jetten and Jan Horbach (3rd) and the brothers of Lennep (6th) are the best Dutch. The ladies Pat Carlsson-Moss and Elisabeth Nystrom win the Coupe des Dames. The awards ceremony will be on Saturday (April 30) this year, to give the results centre more time to calculate the results.

Take a look at the Tulpenrallye edition 1966 with the selection of images below that we have selected for you!