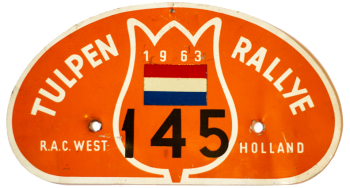 Because the French government had asked in advance to limit the number of special stages and the organization thought that the connecting routes between a number of special stages were too long, the 15th edition (2950 km) becomes considerably shorter than the previous one (4000 km). The route is already included in the regulations this year, so that a number of participants will explore the route in advance. However this does not mean much, because many roads are still full of snow and ice just before the rally. The participants in the International rally are divided into nine classes and come from ten different countries (including the USA).

The first test is Tuesday morning in Belgium at Brecht; a piece of concrete road of three kilometers with standing start and flying finish (average speeds are reached above 170 km / hour). The next test consists of driving around the large  Nürburgring, after which the crews drive into the night towards the Vosges. This is followed by a climb at Struthof, after which the fourth test is held in Trois-Epis. In the middle of the night the ascent of the Ballon d’Alsace would follow, but it will be canceled as a result of the fog. Via Champagnole in the Jura the crews then drive to Mont Salève (under Geneva), where they arrive next morning. The turning point is on the Chamrousse at Grenoble, where on Wednesday afternoon a test of 17 km is driven up. On the way back the Mont Salève is again visited, then the climb of the Col de la Faucille and then again the Ballon d’Alsace. Wednesday night starts from the Col de la Schlucht; the hardest part of the rally in bad weather: 144 km with tests at Breitenbach and to the Cascades de Nideck. Thursday morning there is a short rest in La Roche, followed by a climb to Samrée and a test at the Circuit of Francorchamps. Via a test at the Circuit van Zandvoort, the participants arrive on Thursday afternoon, without any sleep, again in Noordwijk.

Erik Carlsson forfeits his chances of winning when he stops at the Nürburgring twice with fuel problems; there are rumors that there would be sabotage here. During the fourth test, the climb to Les Trois-Epis, the Austin Healey of Astle-Grimshaw hits the road, and Derek Astle is killed. Pellikaan-Maasland come to Wangenburg almost without petrol, but when they reach an English Vauxhall team that has fallen off the road and landed in a pasture, they get their petrol as a reward. Ben Pon is disqualified for obtaining service along the route (contrary to the regulations).

The French team Gréder-Delalande with Ford Falcon Sprint are the winners of this Tulpenrallye, while the Coupe des Dames is won this year by Pat Moss and Jennifer Nadin. Bakker-Umbach are the best Dutch with a victory in the GT category. The amateur class is won by the British Vauxhall team Allen-Wooley, while the brand award goes to the team of the DKW factory with Gele-Laurent, Kling-Kaufmann and Guilhaudin-Balas. The closing party will be held on Friday this year. The awards ceremony takes more than one and a half hours, partly because there are more prizes than participants.

Take a look at the Tulpenrallye edition 1963 with the selection of images below that we have selected for you!