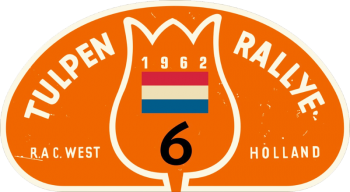 Jacques Lioni, one of the men of the first hour, withdraws from the organization this year because he is too busy with other activities. The number of participants is disappointing this year, especially among the Dutch (41). The National Tulpenrallye has been abolished, because most Dutch crews prefer to participate in the international competition. However, they are not able to cope with the foreign factory teams, which is the main reason for the disappointing number of national registrations. The participants are divided over ten classes and the new system for calculating the final ranking seems even more fair and totally excludes the possibilities for forming combines. Although the number of participants is on the low side, the entire European top-league appears at the start. This is an achievement of the organization, especially if one considers that the Tulpenrallye is one of the few rallies that does not yet pay prize money.

The Morley Brothers start with number 1 in their Austin Healey. Other contenders are Riley-Astle (also with Austin Healey) Rauno Aaltonen with MG, the German Porsche factory rider Hans Joachim Walter, the former European champion Gunnar Andersson from Sweden (with Volvo 122 B 18), Erik Carlsson with Saab and Ben Pon-Rob Gorris with a Porsche Carrera.

The start takes place on Monday night at 11.51 pm. 21 special stages are included in the route, of which 18 will eventually also take place. Tuesday morning the participants are very early at the Nürburgring for the first special stage. After that the route goes through the Eiffel and then to Saarbrücken, after which the crews drive all day in the Vosges. The test at the Ballon d’Alsace starts only after a delay, because of a gendarme who is not well instructed and a farmer with his cattle that first has to pass roads of the test. At the beginning of the evening the participants arrive in Geneva for one night with two heavy trials (Mont Salève and Chamrousse). The next morning there will also be a large number of tests (Col St. Jean, Mont Ventoux, Col des Leques, La Roquette and the Col de Turini), after which the participants arrive in Monaco around noon. Here they can rest for 18 hours until Wednesday morning when the return route starts. During this break, no intermediate score will be published,so that all participants and stakeholders can fully speculate about this. Through various heavy special stages the route then leads to Champagnole, where there is a time check at night, after which the crews arrive in Belfort on Thursday morning. From there it goes again through the Vosges to Belgium, followed by some tests in Luxembourg. The final test will be held on Thursday afternoon in the Netherlands on the Camerigerberg near Maastricht.

The young Dutch team Vos – Den Boer gets off the road after the test on Mont Ventoux when a piece of metal tears a tire. Although they only ride at low speed, Henk den Boer is killed. During the rally the Dutch team Ben Pon / Rob Gorris will have an ever better chance of winning when first the faster Walter on the Col de la Charbonnière has to give up with rear axle problems and then the ladies Hall and Domleo, who then are in the lead, do leave from the road. On the way back however, Pon and Gorris get problems with the gearbox. At the check in Larochette there are pieces of iron in the bin. They are still trying with new oil, but outside of Larochette the rally for them comes to an end. The replacement gearbox that is already on its way to Camerigerberg is coming too late. Dries Jetten, at that time leader in his class, gets off the road on the Camerigerberg. He confesses that he was insufficiently concentrated because he knows the area too well. With a tractor he is dragged back on the road and he still reaches the finish.

The participants can rest on Friday, followed by the prize-giving ceremony on Saturday at five o’clock in the afternoon and the closing party that starts at eight o’clock. Pat Moss however, flies back and forth to Luzern in the meantime to take part in a jumping competition. The Tulpenrallye party at the end of the rally, largely organized by Mr. Tappenbeck from Grand Hotel ‘Huis ter Duin’, is particularly popular among the participants in these years. The hotel is decorated with tens of thousands of tulips, a huge cold buffet appears and various orchestras play at the hotel. ‘Huis ter Duin’ is celebrating 75 years this year! The ladies Pat Moss and Ann Riley are the first all-female team to win the Tulpenrallye and of course they also take the Coupe des Dames home. For Ann Riley this is a particularly nice conclusion to her rally career. She stops the sport because she expects a baby (Tulip runner participant Peter Riley is the father). Competition leader Nortier refers to this during the award ceremony by asking whether the ladies have won within the regulations, because they were in the car with three people. Joop Heidendahl and Bob Boekhout, with Alfa Romeo Giulietta, are the best Dutch crew. The country team prize goes to England, while the brand team classification is won by Auto Union / DKW. The team of the Royal Swedish Automobile Club wins the club team prize.

Take a look at the Tulpenrallye edition 1962 with the selection of images below that we have selected for you!