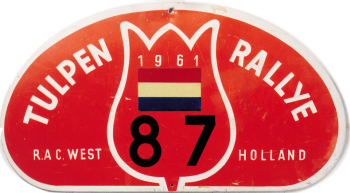 The original planning has been to start the rally on Monday, May 1st. However, this is a national holiday in France and organizer Piet Nortier does not manage to get the necessary gendarmes on that day to manage the special tests. The start is now on Tuesday, May 2 (albeit at midnight), so the finish is only on Friday evening and the results office has to work through the night to publish a classification on Saturday morning. The fastest team per class gets zero penalty seconds on each test and special stage. The subsequent teams will receive penalty points based on the time they finish behind the class winner: 1 penalty point per second later. This system is particularly aimed at the prevention of combines, as in the previous edition. Furthermore there are 60 penalty seconds per minute late to a (time) check and various other reasons for possible penalty points. During the rally, the intermediate classification will be kept secret for the participants; this is also to prevent the combines. 3000 gendarmes are used for the rally, while the organization sends out another 250 officials.

For the second time, a national rally is organized. This includes four DAFs, for Roeloffzen, v.d. Berg, Blansjaar and Kouwenberg. A total of 38 participants in the 2nd National Tulpenrallye, including the brothers De Wild with a Volkswagen Beetle under number 208. The BMC team enters a particularly strong team for the international rally, with the Morley brothers (winners of the Tulpenrallye in 1959 ), Pat Moss-Ann Wisdom, Gold-Hughes, Morris-Elford and Riley-Ambrose. Other acquaintances at the start are Maus Gatsonides-Dries Jetten, the ladies Hall and Domleo, Hans Tak, the Swede Erik Carlsson (Saab) and the couple Carstedt. Dooijes-Slotemaker do not start because of Slotemaker’s illness. The British team Fischer-Rawkins joins the rally as a honeymoon. 142 participants will start in the International Tulpenrallye.

The route is largely similar to that of 1960. In the rally, fifteen special stages and four special trials have been included. After the start, the participants drive directly through Luxembourg to the Vosges. On Wednesday night there is a rest at the Ripotot hotel in Champagnole, after which the route continues through an almost entirely new area. Wednesday afternoon the participants arrive in Monte Carlo for a rest of 17 hours. An acceleration and braking test will be held there. The return route consists for a significant part by driving the same route in the opposite direction. The final test will be held at the Francorchamps circuit in the Belgian Ardennes. The Vredestein service cars are at seven different locations during the route. In addition, they transport the luggage of the participants and the large bus serves as timekeeping centre in Monaco.

Tonio Hildebrand has to give up when the organization gives him a note in Champagnole stating that he is not allowed to continue because he was temporarily denied the right to drive. The Germans Umbach and Riesenberg come upside down in a ditch. Walter and Steunebrink help them to get out of the car; if this happens too harshly the unfortunate Germans warn them to be careful with the paint of the Porsche. They continue later, with pants and a pair of shoes outside the car so that these can get dry. Although the battle during the rally is not easy to follow (no intermediate positions are being published), it gradually becomes clear who the main contenders are: Hans Joachim Walter (Porsche) and Carl Magnus Skogh (Saab). Leslie Griffiths and Jeff Mabbs are however the unexpected winners of this 13th Tulpenrallye. They win, among other things, through the new system; after all, they drive in a class with not too many strong opponents and therefore run only few penalty points in tests where they do not finish first. The only real opposition in their class comes from the team Lewis and Stone, also with a Triumph Herald, so that Griffiths and Mabbs do not get enough victory points.

In Eindhoven it is discussed and agreed that Lewis will not finish so that Griffiths gets enough points to get the victory. Lewis gives up 50 meters before the finish in Noordwijk. The new system therefore fails in this area, leading to the necessary criticism at the finish. Mabbs wants his wife to come over for the prize-giving ceremony, but this is not possible at first because her passport is in the safe and Mabbs has the key. Via the intervention of the K.N.A.C. she can travel to the Netherlands without a passport, but unfortunately she is still half an hour late to see her husband receiving the prizes. Pat Moss and Ann Wisdom win the Coupe des Dames with Austin Healey 3000. Jan Smulders and Luc van den Bergh win the national rally with DAF 600. They had in the weeks before the rally focused on reducing weight to a true art. All necessary upholstery was removed from the DAF. They used matches instead of lighters. A small fog lamp was the only concession that the team did. Even clothing, food and drinks were left at home. This led to the joke that Smulders and Van den Bergh shared a pajama (one wearing the jacket, the other wearing the pants).

Take a look at the Tulpenrallye edition 1961 with the selection of images below that we have selected for you!