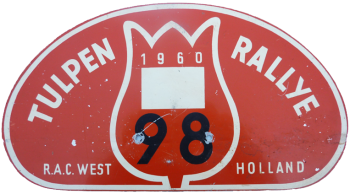 The rally again has no approach-routes; all participants start from Noordwijk. The final test at the Circuit of Zandvoort has been cancelled, in order to have more time to continue the rally to the south (Monte Carlo). In Monte Carlo a rest is planned (22 hours), which leads to comments that the rally is not heavy enough to count for the European Championship. New this year is the National Tulpenrallye, an attempt to give the growing number of amateurs their own competition and classifications. For the first time, stamp clocks (Longines) are used to ensure that there will no longer be any deviations between the time cards of the participants and the logs kept by the officials (this was the reason for some of the protests in 1959).

From Noordwijk the route goes via Eindhoven, Liège and Vichy to the Auvergne. This is followed by a route through the Alps with five special stages, after which only the test on the Col de Turini (12 km) separates the participants from the rest in Monte Carlo. This test must be driven with an average speed of 60-64 km / hour. Only ten teams succeed. This test has the largest impact on the results in this edition of the Tulpenrallye. In the route from Monte Carlo to Noordwijk, 1844 km, the other six of the seven tests of this Tulpenrallye are being scheduled.

Despite the worries after the successful, but barren, eleventh edition, 204 participants registered for the 12th Tulpenrallye. 82 of these contenders come from England. Among the most important participants are Tak-De Boer with Mercedes 300SL, Morley-Morley (the winners of 1959) with Austin Healey and Slotemaker-Crellin with Triumph TR 3A. Other contenders are Gatsonides-Steunebrink with Jaguar 3.8, Kreisel-Flinterman with Renault Dauphine, Barendregt-Blansjaar with Citroën ID 19, Carlsson-Karlsson with Saab 96 and Langestraat-Van der Wansem with Austin Seven.

Piet Jetten and Louis van Noordwijk do need to retire at the Col de Turini at the eleventh and twelfth participation respectively, by breaking a simple split pin in the rods to the gearbox. The Mercedes 220SE teams, Schock-Moll, Mähle-Ott and Böhringer-Socher are now in a combine to help Schock win the overall victory. He is particularly keen on this, because he won Monte Carlo earlier this year and a second win gives him a firm lead in the European Championship standings. During the route, the Germans talk extensively about the combine and this is when the French, normally not really friends, decide to help Verrier and Trautmann in the same way. For this reason, Marang has halted for eight and a half minutes in the final test. Afterwards, when calculating the detailed result, it appears that this had not been necessary. Verrier drives on the last route from Eindhoven to Den Bosch straight through the roundabout at Deil and damages his car extensively. Fatigue is the cause, but the victory can no longer escape him. The ladies Pat Moss and Ann Wisdom, with Austin Healey, are the only British team that reaches the finish without penalty points.

The rally has no protests and disqualifications at the finish for the first time in many years. The French team Guy Verrier and Rene Trautmann wins this edition. The Citroën after the heavy collision no longer resembles the original model, but none of the other teams protest against this. The car is ready for the junkyard at the finish. Pat Moss and Ann Wisdom with Austin Healey win the Coupe des Dames. The national Tulpenrallye is won for the first time by Hoogslag / Honhof with Volvo PV544.

Take a look at the Tulpenrallye edition 1960 with the selection of images below that we have selected for you!