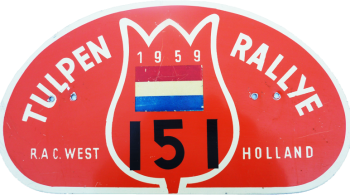 The organization has decided this year to drop the approach-routes and let all participants leave from one starting point. The route for all teams is exactly the same and the classification is being started to be built right after the start on the basis of tests and trials. The rally is divided into two classes: one main group for the normal and improved series cars and the second main group for the normal and improved Grand Turismes plus the special series cars. The number of registrations is disappointing, especially the number of British, German and Dutch teams is lower. The start is in Paris, so many teams cannot start in their home country. The main class classification, whereby participants with normal series cars do have little chance, is given as the main cause. 2500 gendarmes are used during the rally to close the roads or to close and regulate traffic. Hans Tak starts under number 1 with his Mercedes 300 SL. Piet Jetten and Louis van Noordwijk start their ninth and tenth Tulpenrallye respectively.

Paris is only used as an indication for the start. The actual start will take place at the Circuit de Monthléry, 25 km south of the French capital. The first part of the route leads through new terrain in the middle of France. The mountain massif between Auvergne and Valence is a fascinating setting for the rally. Through the Provence and the eastern part of the French Alps, with a climb on the Puy de Dome, the participants reach Valence. In the first night, with very bad weather, a route of more than 500 km follows to Bedoin with no less than ten time checks in the first 300 km. The next day they leave from Bedoin, the southernmost point of the rally, to the north.

The first special stage, 21 km against the Mont Ventoux, is new in the rally and forms a special challenge with fog, hail, snow and a very strong wind. Via the Chamrousse the crews drive to Switzerland where on the Côte de Givrin a trial is being held for the first time in the Tulpenrallye. The routes in the Vosges are particularly heavy as a result of fog and rain, and fog also plays a role on the Route of the Thousand Bends in Luxembourg. The final test on the Circuit of Zandvoort is run under bad weather conditions, but does not result in any changes to the classification. The rally will go down in history as ‘De barre Elfde’.

Hans Tak is soon out with a broken oil pan. Only four teams remain without penalty points in the first night stage to Bedoin. Joop van Nieuwenhuijsen meets three deer on a trial in the Vosges. He manages to avoid the first two, but the third one gets a full hit. The heavy animal ends up as a result of the collision between the stones. Ten minutes later the deer is removed from the road, the stones are piled up again and Van Nieuwenhuijsen continues. Cees den Ouden loses two hours when a sixteen-year-old boy stumbles when he gets frightened by the passing cars. He sprained his thumb, the police found that the boy would not be able to work for a month and puts Den Ouden in prison on that basis. It takes him two hours and 10,000 francs to be released on bail.

In Noordwijk, three teams have been wrongly entitled to waive the penalty points they have incurred on the tests: Morley, Ballisat and Wallwork. Due to several problems in the timing of the rally and various controls, many protests are being filed. There will be more than ten hours of meetings about these protests and eventually a final classification is being published. Morley / Morley / Hercock with Jaguar 3.4 are the winners of this eleventh edition, despite a number of protests. The Coupe des Dames is won by the Norwegian Greta Molander, together with Helga Lundberg with a Saab. Wiedouw and Gorris are the best-ranked Dutch. The English win the Nations Trophy.

The organization realizes afterwards that the rally in this way probably is digging its own grave. The most outspoken (and therefore top) drivers have asked for such a heavy edition for years, but for most amateurs this goes too far and the fun soon goes away. The class classification applied this year is another reason that makes it less attractive for amateurs with a car that they have to use for the rest of the year on the regular roads.

Take a look at the Tulpenrallye edition 1959 with the selection of images below that we have selected for you!