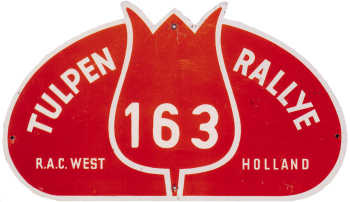 The rally is again being renewed this year. There are only four starting places and the route runs almost exclusively through Germany and Austria, with only a small part in France, due to the gasoline problems caused by the Suez crisis. Furthermore, the first part rally until the turning point has no rest-day and there is also no rest day between the final test at Zandvoort on Friday and the award ceremony on Saturday. The handicap system has been cancelled partly on the basis of the criticism in the previous year. As in 1953 and 1954, the classification is calculated on the basis of points achieved in the class on the special stages. Because there are five groups with eleven classes, each based on cylinder capacity (per class at least ten entries are required), the participants in their class compete against equal opponents. The rally came about with great difficulty this year, and a week before the start there is still a problem. The state of Baden-Wurttemberg at the last minute does not want to give permission. This also endangers the route in France, because the route from Germany to the Vosges passes through this state in Germany. A number of air trips from Nortier and his colleagues to Germany and some nightly rides in the area eventually yield the necessary permission. 118 of the 220 registrations consist of foreigners, spread over 13 nationalities. 20 brands and 66 different types of cars appear at the start. The rally class again attracts few participants: 10. Hans Tak is again one of the favorites with his Mercedes 300 SL, as well as the Danish Andersen with the same car. Piet Jetten and Louis van Noordwijk start with a Vauxhall Victor that the F.I.A. officially approved. The Swede Carstedt starts with his wife Gulli in his sixth Tulpenrallye.

The approach-routes come together in Stuttgart where the joint route starts. Due to the snow on the Autobahn, some of the eleven Goggomobils started, cannot reach the average speed (75 km / hour) and already obtain route penalty points. It rains particularly hard at the start at the Solitude ring. Later this will turn into snow and on the route in the Bavarian Alps people will suffer a lot of ice. On this ring is the first classification test, Glemseck-Dreispitz, about 3 km. In Nagold is the first regularity check. The participants receive a bulletin asking them how high the average speed is; this is a warning for possible subsequent checks. The next test runs from Freiburg to Schauinsland. The test is shortened by 4 km, because the highest part of the test consists entirely of ice. The route through France is 330 km, so that the participants can make it without refueling. The test on the Ballon d’Alsace this year is 9.5 km with a height difference of 500 meters. At an hour’s rest in Garmisch-Partenkirchen (a breakfast at the Olympic ski stadium), the participants are tired and find the rally heavy, especially due to the harsh winter weather. A day later at the rest at the Nürburgring, when there have been no problems with snow and ice, there is still a vote that the rally is on the light side. After Garmisch the 3.4 km long run from Berchtesgaden to Obersalzberg follows with a percentage increase of 24%. Especially the route from the fourth to the fifth test, for a large part along the Czech border, is too simple. The organization had planned several tests, but no permission was given at the last moment. The test at the Nürburgring this year runs from Breidscheid to the Gegengerade over 9.5 km. From here the participants return via Eindhoven to the finish in Noordwijk.

Bill Banks, second in 1953 and 1955, lost his way and thus gained two penalty points. If he gets lost again on the route to Schotten, he gives up. Kreisel and Ten Hope do an excellent job with their Renault Dauphine, they show especially on the second test that they are significantly faster than the competitors in their class. The car has a five-speed gearbox and a fast engine. However there is no heating on board and at the finish of one of the tests it is -12 degrees in the car. After the test at the Ballon d’Alsace, both Kreisel and Tak each have 30 victory points, followed by Heidendahl at 1 point less. After the fourth test there are nine Dutch teams in the first ten, which increases the hope of a national victory. The British team Bayes-Abrams-Chapman collides with a Volkswagen that does not participate in the rally. The three Britons go to hospital with injuries, while one of the occupants of the Volkswagen is killed.

There is again a lot of public at the final races at Zandvoort. Admission prices vary from three quarters to seven guilders fifty. At Zandvoort, five rounds have to be made this year and a victory in the class yields 20 victory points (out of the total 75 points that can be achieved in the rally). Hans Kreisel drives for what he is worth; he knows that he has to win his class in order to maintain his leading position in the rally. Despite the opposition from Kalkman he succeeds in this. Hans Tak also wins his class. After the races at Zandvoort a number of participants will be disqualified and a number of protests will follow. Kreisel and Tak both have equal victory points, but with Kreisel the difference with number two in the class is much larger, which means he wins the rally. The rally eventually has a triple Dutch victory. Hans Kreisel and Dries ten Hope are, at the seventh participation in the Tulip Rally of Kreisel, the winners, followed by Tak-Niemöller and Koks-Gorris. Kreisel and Ten Hope also win the Three Zero Coupe this year. Obviously, the Netherlands also wins the Nations Trophy. The ladies prize is for the Ladies Hall (formerly second driver at Sheila van Damm) and Hopkinson. The club team prize goes to the Porsche Club Holland, with Koks, Schorr and Leerdam, while Ford wins the brand team prize. Dries Jetten and Hein Korte win the class with their Goggomobil and conquer a nice fifth place overall in their first Tulpenrallye.

Take a look at the Tulpenrallye edition 1957 with the selection of images below that we have selected for you!