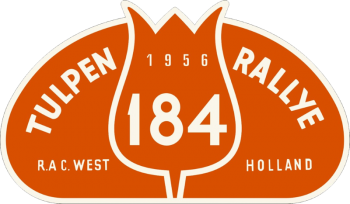 In addition to the competition class, the rally class is being introduced this year. Crews in this class drive exactly the same route including the tests, but they do not have to be driven at speed. Unfortunately, this initiative attracts only 17 extra participants. The French government once again demands that regularity checks be included in the route. If the average speed measured during these inspections exceeds 75 km / hour (the average for the rally is set at 55 km / hour), 30 penalty points will be awarded and above 85 km / hour one will be excluded from further participation. This year there will be strict checks on the technology of the participating cars; 4 teams are disqualified. Hans Tak departs, as winner of last year, with starting number 1 with his Mercedes 300 SL. The Swede Andersen and the Dane Bussler start in similar cars. Kurt Zeller starts in one of the two new (there were four registered) Porsches Carrera.

Via the approach-routes of about 850 km each, which must be covered with an average of between 50 and 55 km / hour, the participants reach Champagnole in the French Jura where the joint route starts. In the route nine special stages have been included this year. Monaco acts as the turning point of the rally. The joint route starts at ten o’clock on Sunday evening, May 6, and leads partly through Switzerland. The 80 km to Gex has many curves. The first test starts in Gex: the ascent of the Col de la Faucille. The second test is the famous climb to the Auberge du Pin. The next two tests are new in the rally: the Grimone Pass and the climb of the Col des Leques. In Monaco, partly because of the preparation of the Grand Prix, it has not been possible to set up a parc fermé. Technical commissioner Cees Rijshouwer therefore boards a plane to the south of France with a number of pots of paint. This paint is placed in the Monte Carlo on the bonnet and other vital parts of the car as a seal before the break, of about 17 hours, so that no tinkering is done during the break.

The way back begins with the outward route of the previous day in the opposite direction. The next test (the fifth) is the Col des Leques. This is followed by the Col Bayard with 4.9 km length. The seventh test with 17 km is the longest of this rally: the climb to Chamrousse. Piet Nortier had already planned to drive on this mountain, but that is only possible now because the road runs over the mountain so that the participants do not have to turn at the top. The Ballon d’Alsace is again included in the route, this year as the eighth special stage. There is no special stage (Thousand Bends) this year in Luxembourg and the Ardennes. The participants therefore set sail from Luxembourg via Echternach to the Nürburgring. The test there covers only 5 km, after which the teams ride to the finish in Noordwijk via the rest in Eindhoven.

The adjusted handicap system has a clear influence on the results this year. After the first special stage,  Brookes Jr. and Sr. are in the the lead with their Austin A30. After the second test they are followed closely by four cars of the Standard 8 type. Tak is the fastest on almost all tests, but he is not in the top of the standings and ends the rally as 24th. At the finish it appears that only 17 participants have accumulated penalty points. This also has to do with the beautiful weather during the event, but many participants find this edition somewhat on the light side. In addition, the criticism of the handicap system in this 8th edition remains for a long time. Jetten and Van Noordwijk finish for the sixth time with zero penalty points.

The final test at Zandvoort is held this year on Thursday, Ascension Day. Friday is a rest day after which the prize-giving ceremony and the closing party take place on Saturday. This year there will be a race over ten laps, with all cars in the same class, contrary to the year before, in the same race at the start. The handicap for this test is 25%, instead of 50%, which again has a significant influence on the overall results.

Father and son Brookes win the rally with the small Austin A30, while Ruth Lautmann together with Renate Utermohl win the ladies prize. For the first time, hand-forged silver tulips are awarded as a class prize. The Netherlands won the Nations Trophy, with Tak, Koks and Kreisel, while the K.N.A.C. wins the club team prize with Coenen, Heidendahl and Van der Wansem. The brand team prize is won by Standard. Piet Nortier receives a large box in the form of a tulip with a pipe and other tobacco products during the award ceremony on behalf of the Dutch participants.

Take a look at the Tulpenrallye edition 1956 with the selection of images below that we have selected for you!