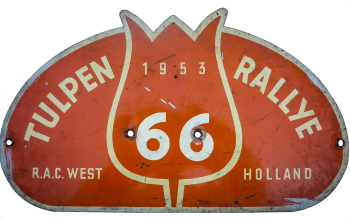 In this edition, the organization is looking for methods to determine the classification during the rally,  and wants to reduce the influence of the final trial at Zandvoort on the overall results. The system is also intended to become more fair and more competitive, as overall winner of the Tulpenrallye is stil decided based on the competition in the different classes. In Spa, the roadbook ook is issued only three seconds before the start. The cars must comply fully with the specifications specified by the factory this year and may not be upgraded.

Through access routes of approximately 500 km, all equipes reach the joint spa. The rally contains 5 special stages and 4 class tests. The first trial is at Clervaux and has a length of 1150 meters with 100 meters height difference; a drop test. This test must be done without turning on the engine of the car; Only the hand brake and foot brake may be used! At the start, a number of officials pulled away the wheels of the car, after which the test starts. Some participants throw the tank a little longer with gasoline to give more weight during the descent. Furthermore, the tires are heavily pumped by most participants. In the car, an official takes place to supervise the driver. After this, the Wilwerwiltz special stage goes to Heiderscheidergrund. The 82 km must be taken in 72 to 88 minutes (different per class). In the meantime it has started to rain very hard. From Luxembourg, the route then goes to Epinal, where the climb of Ballon d’Alsace (9.5 km) starts, starting in Malvaux. The equipes are affected by rain, snow and fog, which in many cases is significantly slower than last year (Imhof with his Allard, for example, needs almost two minutes). Following is the second special stage about 42 km from Willer to Schweighouse. It is still very foggy and the participants therefore get more time to drive this stage. After Piet Nortier has decided to give all equipes five more minutes for the stage, he can not get in touch with Han van der Heijden, who is on the spot. It is then decided to send this message in a sealed envelope to Appleyard who will or will first take the stage. From Belfort it goes to Geneva, the southernmost point of the rally, which can also be restored. The return road begins with the climb of the Col de la Faucille (10.6 km with a height difference of 600 m). The third special stage runs from the top of the Faucille to St. Claude and counts 387 turns. Following is a route via Dole, via the Ballon d’Alsace for the climb during the day, to Gerardmer. The next special stage then goes to Saarbrucken over 80 km. The final stage is the route of the ‘Thousand Bends’ and brings the participants to Liège. From there, via Roermond, Eindhoven and Breda to Noordwijk. The following day, on Koninginne-day, the final test will be held on the Zandvoort Circuit. The ten best-placed participants from each of the ten classes will get started. The races start with a Le Mans start, after which ten rounds must be taken in the opposite direction. On the circuit are stands for 1000 additional visitors placed.

After the first two trials, Bill Banks is in charge of the Vosges, followed by Carstedt and Van Zuylen of Nijevelt. Coenen and Butter (the famous sliding roof manufacturer) find a solution for the fog in the second special stage. Butter goes into the car and has a better view of the road through the open roof. He pulls driver Coenen left or right on his hair to indicate in which direction to be driven. Dries van der Lof is out of Geneva with problems with his MG oil charter. The car is transported back to the Netherlands in the Vredestein service truck. For the final test at Zandvoort, seven equipments are disqualified because the cars are not in accordance with the rules (Gatsonides are also listed below). The Jowett Javelin of Frenchman Becquart, whom he immediately got from the factory, proves to have a non-original engine. His winning points are therefore part of Count Hugo van Zuylen van Nijevelt, thus writing the rally on his name. After that, Elliott’s Sunbeam, which he recently took over from Stirling Moss, is also rejected; He was second to the final test in Zandvoort. Banks, who was initially honored as a winner of the rally, are now trying to get their place back through a protest. He protests against Clarkson’s Morgan. This has fallen out, but according to Banks, his car is not regulated. If this protest is awarded then Banks is the winner again, because then he can add Clarkson’s winning points to the Balloon with him. The protest is, however, rejected, especially because Clarkson’s car can not be checked for the finish because he has previously fallen out. Hugo van Zuylen van Nijevelt and Frans Eschauzier make the Netherlands the first victory in the Tulpenrallye. The Piet Jetten-Louis team of Noordwijk-Nol van der Vlies will be fourth and will also win his own class and will be the fastest in the final test at the Circuit van Zandvoort, for Sheila van Damm. Louis van Noordwijk is currently also a commentator at Formula races in Europe, a bancommentator on the Circuit of Zandvoort and he will be commentator at ‘Sport in Beeld’, the TT of Assen and Avro’s Rallycross. Ian Appleyard occupies fifth place in the final class. Jowett Javelin wins the brand name with Van Zuylen from Nijevelt, Scheffer and Homan. Greta Molander and H. Lundberg win the Coupe des Dames.

Take a look at the Tulpenrallye edition 1953 with the selection of images below that we have selected for you!