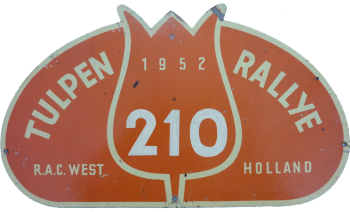 After the experiences in the 3rd edition, the approach routes in this rally are considerably shorter and the joint route already starts in Brussels. A new classification method has been developed for this edition, with three special legs and three, that should have been four, special stages. 239 crews do appear at the start of this edition. They represent 11 nationalities and bring cars from 50 different brands to the start.

The first special stage is at the Citadel of Namur (Belgium), but cannot continue because the responsible organizer (Monsieur Lavigne) has made a mistake by planning the event one month later than the actual date. Between St. Flour and Le Puy in the Massif Central the first special stage with a length of of 80 km is being held (the night of Auvergne). After this, the participants are confronted with the first fog and sleet. The first 1800 km have been completed at Valence. The 2nd test, from Malvaux at the foot of the Ballon d’Alsace, is a mountain climb with a length of 9 km and a difference in altitude of 490 meters. Ten bonus points for the crew that makes the fastest time in its group, eight points for the second, and then seven, six points etc. The third test is set out on the Col de la Faucille where ascent and descent form a track of 25 km, under the title ‘Morning in the Mountains’, which has to be covered with an average of 54.55 km/hour (group I to IV) and 60 km/hour (other groups, V to IX). The fastest is A.G. Imhof with an Allard with a 5.5 liter Cadillac engine, with an average speed of 81 km per hour. The Route of the Fifteen Mountains at Schweighouse in the French Vosges is included for the third time in the route of the rally. The route consists of 130 km in a beautiful landscape. The third night (until then the participants have had no rest) will be held under the title ‘Night of the Thousand Bends’. The 4th test is at Schiphol in the Netherlands, just before the finish. After a run of 150 meters, the starting line must be passed in the highest gear and then a very winding course of 550 meters must be driven in this same gear: a smoothness test. An inspector is sitting next to the driver to determine that there is no changing of gears.  When the participants have arrived in Noordwijk, the village is decorated with flower decorations by the inhabitants and Dutch flags are hanging almost everywhere. On the boulevard the luggage of the participants is unloaded by boy scouts, after which the cars are technically inspected (also because of the races at the Circuit of Zandvoort the next day).

As the different routes in France have not been too complicated, five teams arrive in Noordwijk with 0 penalty points and 18 bonus points: H. Kreisel with Renault, K. Barendregt with Simca, K. Wharton with Ford Consul, K. Ton with Citroën and A.G. Imhof with Allard. On Friday, the final classification test will be held at Zandvoort. The fifteen best-placed drivers in each group have to drive ten laps on the track; a Le Mans start is included. Twenty bonus points can be earned for the fastest driver in the group; 10 after the first 5 rounds and another 10 after the next 5 rounds. Kreisel forfeits his chances of victory by giving too much gas at the start so that the engine stops and he can not drive away until the other participants have already left. Barendregt is also unlucky when his accelerator pedal stays in the ‘floor stand’ at the start; he too does leave much later and therefore misses the necessary bonus points. He is forced to take the entire process at full throttle and sometimes turns off the contact ahead of a turn in order to reduce speed. Ken Wharton, with Ford Consul, wins the race in group IV and thus secures his victory in the rally. G. Imhof is in fact disqualified. He was been working behind the pits under the bonnet, which is against the regulations. At that moment there was a fire. Karel Ton did not get enough points in his race.

186 teams are classified at the finish, of which 118 remain without penalty points, which undoubtedly has to do with the mild weather in France. Ken Wharton is allowed to keep the beautiful silver Tulip Trophee in his possession, because he has won the rally three times now. The brand team prize is for Renault with Jonkers, Kreisel and Martens and the club team prize goes to the R.A.C.-West with Barendregt, Kreisel and Ton. The ladies Sadler-Dunham and Blackburn win after an exciting battle with their acid-colored Rover, the Coupe des Dames. In a presentation of 2 hours and 20 minutes, clerk of the course Piet Nortier divides the 150 prizes. The closing party is being held with 1600 guests.

Take a look at the Tulpenrallye edition 1952 with the selection of images below that we have selected for you!