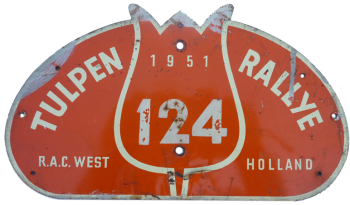 The third edition surpasses the two previous ones, both from a sportive perspective as well as in the field of the organization. More than 1000 staff members are active for the rally and they mainly have to deal with the consequences of a particularly long and severe winter (in the Vosges it has not snowed so much since 100 years). The eight different approach routes to Clermont-Ferrand are each about 2000 km long. These routes have to be covered with an average of 50 km hour, which is not really difficult under the almost summer weather conditions, with time checks after every 250/300 km. The joint route is about 1400 km long. Furthermore, the sporting class is introduced in this edition, in which the average speed is 8% higher than for the other participants. The rally has a strong international character with entries from England (78), France (8), Denmark (6), Switzerland (4) Italy (4), Germany (3), Belgium (3), Sweden (2), Norway (2), Finland (1), Spain (1) and the USA (1).

The first special stage is at Clermont-Ferrand under the title ‘circuit de Puy de Dome’ (175 km). The nice-weather route is used here, as the other route, over the top of 1400 meters, is not yet snow-free. Only 28 crews are incurring penalty points here, but also 30 crews have to retire. The Route of the Fifteen Mountains is very heavy this time. New roadmaps have to be printed three times, due to a lot of snow, closed roads and broken roads. In the new route there are some very bad roads, especially on the Col de Bramont. Eighty crews incur penalty points and the number of retirements grows. The 106 km long Parcours du Bonhomme also suffers from 3 to 5 meters high snow that will only be completely cleared a month after the rally. As a result of this the route is changed to the main road over the Col de la Schlucht and the Col St. Marie (at the top is hotel-restaurant ‘Belle Vue’, where many participants arrive with a boiling engine). 72 participants arrive late at the time control. Via a route control in Epinal, the participants then arrive at the Route of the Thousand Bends (140 km), which is held in Luxembourg by night (the third in a row). The tour through the Netherlands, via the Afsluitdijk, does not take place because of the chance that the tired participants fall asleep on the straight Dutch roads. Via Eindhoven (Philips and R.A.C.-Zuid), a route control in Apeldoorn (R.A.C.-Oost) and a time control in Hilversum (R.A.C.-West, region Gooi en Sticht) the participants reach Noordwijk, where the organization runs smoothly. Within half an hour of arrival, the participants visit the permanence in Hotel ‘Huis ter Duin’ for the documents control, intake of road book and foreign exchange issues. The cars undergo a technical inspection before they enter the parc-fermé and the participants are taken to their hotel by taxis.

73 participants start after the total route of 3400 km without penalty points at the special test at the Circuit of Zandvoort. The organization is not happy with the fact that in this way the rally is being decided in just a few minutes, but for the time being has no better alternative. The set-up of the classification test must be such that all classes have the chance to deliver the final winner of the rally. This year is a fairly short test that is run individually. After the start before the grandstand, you drive towards the Hunserug. After a line has been passed, you drive backwards to the bottom of the Hunserug, after which it goes forward and at full speed towards the finish. Ken Wharton loses the rally here by failing to cross the line in the special test. The young Ian Appleyard wins, thanks to the enormous power of his Jaguar.

A thousand participants and invited guests attend the supper and the awards ceremony. There is no ballroom in the Netherlands where more people can enter, and in less than two hours the 140 prizes are awarded. With a further 500 extra guests, the closing party, which occupies the entire hotel ‘Huis ter Duin’, can start with a fun fair with real barrel organs in the supper hall, the band of the Marines and in the evening at 11 o’clock the annual visit of the harmony of Noordwijk ‘Echo der Duinen’. The ladies prize goes to the ladies Francois-Sigrand-Renaud with Renault. The brand team prize is won by the Dutch Renault team.

Take a look at the Tulpenrallye edition 1951 with the selection of images below that we have selected for you!