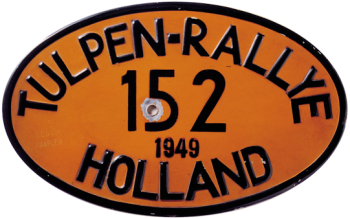 The first Tulpenrallye is being organized by a committee with Lex van Strien as chairman and Jos van Calsteren as secretary. The rally mainly has the character of a star ride, which prescribes a route with a certain average speed. The total driving time of the rally differs per crew. At the finish there is hardly any classification (121 of the 138 teams at the finish have zero penalty points); this is mainly determined by the final test at the Circuit of Zandvoort. This test must be done with the same car with which the rally has been driven. Nevertheless, a number of participants try to take advantage of the final test by making changes to the braking system and the steering system. After an additional scrutineering of the cars and some protests, most of them are penalized. Prince Bernhard attends the final test at Zandvoort. The times are measured on this test for the first time by an electronic recording device from Philips. The test consists of a track of 90 meters, on the straight part of the track. At the end of the track a sharp bend must be carried out, after which the participants return to the finish.

The return route in the Netherlands leads through Brabant, Gelderland, Overijssel, Friesland and North Holland, after which the crews reach Noordwijk via the flower bulb fields. The police deploys six cars to accompany the rally and where necessary to cross roads. The police also helps participants who have lost their way back on the right track and all participants are very satisfied with the deployment of the many officials. The start list consists of about 100 Dutch crews and 60 participants from abroad.

Peter van der Wansem and Frans Vrijaldenhoven are part of a team of three Austins A 40. As passengers they have Martin Duyzings, journalist from the Maasbode. One of the three Austins is from Vrijaldenhoven Sr .; his father asks after the rally where the holes in the roof of his car come from. Son Frans secured the antenna for the rally on the roof, for the short-wave transmitters with by the cars are in contact during the rally. The route for this team leads from The Hague, via Paris (Place Vendôme), Bordeaux and Clermont-Ferrand to Lyon. On the way back, the route runs via Charleville, Troyes, Reims to Brussels (Boulevard des Arts). From there it goes via Breda, Arnhem and Leeuwarden to the finish in Noordwijk. They use 59 hours for this route of nearly 3000 kilometers.

The final test at the Circuit of  Zandvoort seems to be decided between the Gatso of Klaas Barendregt, the Volkswagen of Koks, the Jaguar of the Brit Appleyard, the Czech Minors and the Simca of the French madame Trouis. Just when everyone is waiting for the results to become available, Ford factory driver Ken Wharton throws a spanner in the works by winning the test with 58.65 points. Wharton did the test in the morning (the test had to be run twice; in the morning and in the afternoon) only a moderate time but practiced several times elsewhere in Zandvoort in the rounding of the pole (180 degrees) halfway through the trial.

Upon arrival in Noordwijk the village is exuberantly decorated with tulips and flower arrangements. Most residents however do not come out of their homes, partly because of the cold. The duo Wharton-Cooke, started under number 139, wins the first Tulpenrallye with Ford Anglia. The Coupe des Dames is won by the team Madame M. Trouis / Mrs. C. Gatsonides-Hofhuis, ahead of the ladies Mrs. G.G. van Puyenbroek-Vroom / Ms. E. de Marez, Oyens-van Vredenburch / Ms E.J. Schellerd with Ford.

Take a look at the Tulpenrallye edition 1949 with the selection of images below that we have selected for you!